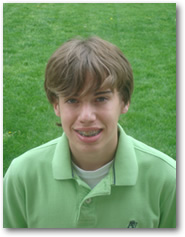 Grant Buehrer of Maumee, Ohio will receive airfare, meals, six nights of accommodations and tuition to attend a week-long session of this year’s American Numismatic Association’s Summer Seminar on the campus of Colorado College, site of the ANA headquarters.

"I began collecting when I was nine, but really got into it when I got my Dad’s collection when I was ten," said Buehrer who will enter ninth grade in the fall and is thinking about a career in medicine or biochemical engineering.

There are several ANA Summer Seminar classes he’d like to take: intermediate U.S. coin grading, photography, the art of money, and Morgan silver dollars.  "I also would like to know more about gold," he added.

Grant’s mother and father, Michelle and Brent Buehrer, were "very surprised and proud" when they were notified by PNG about the scholarship.

"He’s a good student who works hard, and he worked hard at writing the essay (for the scholarship competition).  We’re very proud of him," said Brent Buehrer who also collected coins as a youth.

He playfully toyed a bit with his son before telling him he’d won the scholarship.  "I asked him to read me the essay, and asked, ‘Are you ready to go to Colorado?  You won the contest!’  He had a smile you wouldn’t forget."

The collection handed down from father to son four years ago contained some coins acquired over decades by several relatives including a Morgan dollar dated 1897, the same year Grant’s great-grandmother was born.

The money to pay for the fifth annual PNG YN scholarship is administered from PNG’s Gerald Bauman Memorial Fund.  Bauman, who died in 2001, served for many years as a prominent coin dealer with Manfra, Tordella & Brookes in New York City.

"Gerry was a great person, and he would be very proud of his legacy to young people in numismatics," said PNG President Gary Adkins.

Founded in 1953, PNG is a nonprofit organization composed of many of the top rare coin and paper money dealers in the United Stats and seven other countries.  PNG member-dealers must adhere to a strict Code of Ethics in the buying and selling of numismatic merchandise.  For additional information, visit online at www.PNGdealers.com.