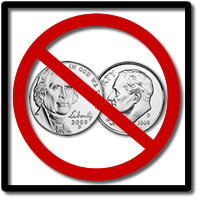 The United States Mint has halted production of circulating 2009 Jefferson nickels and 2009 Roosevelt dimes for the rest of this year, according to the latest issue of Coin World. As the dime and nickel production graphs show, the stoppage creates historic, staggering low mintages for the two coins — levels not seen since the 50s.

Coin Word’s Paul Gilkes reports the US Mint made the announcement on April 23, and included details of a scale back in producing for other circulating coins, like the three remaining 2009 Lincoln Pennies.

It’s not that the public or collectors dislike the new coins. Quite the opposite, in fact. Collector demand for 2009 circulating coinage is exceptionally high. It’s all about the recession. It has, by itself, significantly eroded demand for new coins in every day transactions.

Why? In addition to buying less, consumers as a whole no longer hoard loose change at home. They spend or cash it in, replenishing circulating supplies to such an extent that coin inventories at banks have climbed. Banks, in turn, cut Federal Reserve orders for new coin shipments. Federal Reserve banks do the same to the Mint, which is then forced to slash production.

Electronic transactions has already cut into demand for circulating coins over the last several years. The latest news from the Mint, however, overshadows how drastic demand for coins has been affected due solely to the recession.

Using the latest Mint circulating coin production figures for 2009 Jefferson nickels, 39.36 million from Denver and 39.84 million from Philadelphia were struck, for a total of 79.20 million coins. In contrast, 640.6 million nickels were minted last year. That is an astonishing 87.6 percent reduction. The last time a U.S. nickel had such a low combined mintage was in 1951. 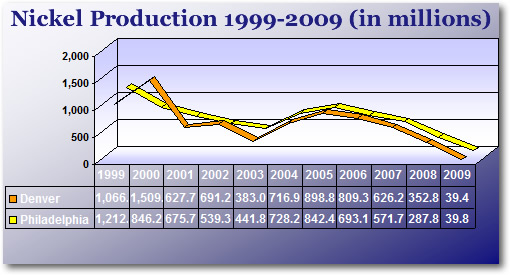 The picture is very similar for 2009 Roosevelt dimes. 49.50 million in Denver and 96.50 million in Philadelphia were struck, for a total of 146 million coins. In contrast, 1.05 billion circulating dimes were minted last year. That is a 86.1 percent reduction. The combined mintage level has not been this low for the dime since 1955. 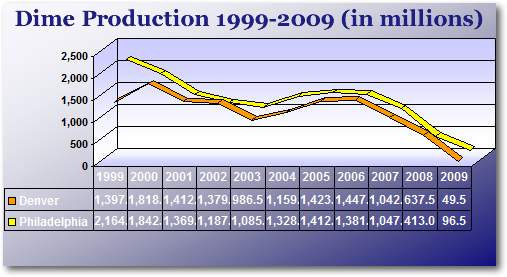 Finding circulating 2009 nickels and dimes will become a priority for many collectors, as their comparative scarcity is extremely attractive. The task may be quite difficult, however. To date, finding 2009 coinage has been a challenge. And unlike other circulating coins, the Mint does not directly sell the nickel and dime in bags or rolls to collectors.

[Editor’s update: 2009 nickel and dime production figures were updated to include totals to the very end of April, which the Mint released on May 1. The original article posting had tallies up to April 29.]

This is frustrating. I have not found a single 2009 coin in circulation yet.

I have only found the DC quarters at a Carl’s Jr. and I bought a roll off them. Its the only time I’ve seen 2009 coins in circulation.

I got 3 2009 Lincoln log cabin pennies in change in Palm Springs back in March (at a Starbucks). Other than that, no 2009’s. I also got a 2009 DC quarter from a vending machine in Portland Oregon.

If any sort of financial sanity and reality prevailed at the US Mint, and with American coins and currency in general, we would have decades ago stopped minting those pathetically USELESS cents, and more recently given up on five cents and dimes as well. Just keeping even with inflation since the 1930’s, when the cent was our lowest denomination coin, we would have the quarter as our lowest value coin today, given the dollar has lost 95% of its purchasing power since then. In addition, we would have long ago stopped printing dollar bills (which as a merchant I HATE!),… Read more »

Even if there’s a recession and people aren’t using them they still should make enough for collectors. And if there was a small amount made why aren’t any listed on ebay?

I have 5 pennies where lincoln sits on a log, two Guam quarters, and 1 Puerto Rico quarter. Thats all I have and seen for 2009 coins.

2009 Jeff Nickels production is listed as about 38M each for Phila and Denver. I have obtained one from the Phila mint but haven’t
heard/seen anything concerning the Denver mint. Has the Denver mint
actually minted the 2009-D nickel? If so, does anyone know the release date?

I would like to give my great grandson a set of coins for his birth year, but as yet, have not been able to find a dime, or a nickel for 2009/ Have they not been minted? or released by the mints? I don’t care about mintmarks as I am not a collector.

I suggest that you go to the US Mint website and order either a 2009 uncirculated, proof or silver proof set. It’s probably the only way that you are going to get 2009 dimes and nickels.

From last I heard that the 2009-D mint dimes are still at the federal reserve in denver, said it could be awhile before they are introduced into circulation. Like don said best luck is to get a undcirculated sets and pull the dimes out!!!

Checked With dealers in Renton,Issaquah,and Auburn Washinton none of t
them have seen 2009-D or Phil. Nicles or dimes. Are they going to be
controled coins like the 1950-D nickle?

Ebay. I just bought a roll of 2009-d roosevelt dimes on Ebay. Dealers are starting to break down the rolls and are selling the individual coins. My advice, get em’ while you can. I’m gonna start hoarding them I think. Something for my grandkids to find once I’m long gone. Good luck!

IMO hoarding would only be reasonable if you’re obtaining the coins at or near face value. Eventually those millions sitting in storage will make their way into circulation and/or the retail market as the economy improves. I’m pretty sure they’ll still be worth a premium due to low mintages but past experience with low-issue coins would seem (to me at least) to favor a price drop before settling down. I’m thinking of what happened with coins like a 1950-D nickel or 1983 quarter. Both were bid up for a while but then went back down after a while. The run-up… Read more »

Received my first 2009-D dime in change from a Publix in Clearwater, Florida. Looks to be a strong 65+ with original luster.

Ironically, the March of Dimes in my area sent out pledge cards with a BU 2009 dime affixed to it. That was the first one I saw in “circulation”, but I’ve found several since then…

As a modest collector,I usually check my change for anything collectible(silver dimes & quarters,war nickels,1943 copper pennies).The cashier at the galley where I worked asked me why,and i told her I was looking for ’09 nickels.Since then,she has found both Denver & Philly ’09 nickels.I also have an ’09 Philly dime;haven’t seen an ’09 D dime yet.

I now know as a collector that the U.S stops production on certain coins and that is plain stupid. If you stop production of Money the dollar goes down with it. I admit I have OCD over coins but coin collecting is the best thing anyone can do because you invest, explore, and Preserves your country’s past. Now if there are any new collectors or any wannabes back the fuck off and leave the coins to the Pros because we know what were doing.

I think people that are waiting for 2009 coins to be released need to realize that the mintages of 2009 dimes and quarters are so low that there aren’t enough for everyone to have one. The population of US is around 312 million. 2009D dimes with a mintage of 49 million means that 1 of 6 americans can actually have one as long as people only have one. With the 2009P dimes having a mintage of 96 million means less than 1 in 3 people. With the 2009 nickels having a mintage of around 40 milion means that less than… Read more »

I have a whole lot of 2009 nickels, What I want to know is how much theyre worth, can someone please tell me, if you email me put 2009 nickels in the subject line, thanks

I’m soooooo frustrated after reading this. I have been looking for a 2009 nickle since I had my daughter. I made a coin collection for each of my children with coins for there birth year and now I won’t be able to complete her set unless. Pay a ridicuolously amount for a nickle this is crazy.

I just found a 2009 d nickel in some bank rolled nickels. Is it a good score?

I MANY have rolls of 2009’s.All Denoms. except the dime. The article only states that the nickle & dime are limited. I get the bricks of pennies rolls. (search online to see what I mean). Great since my grand child was born in that year & I save ALL coins of the birth year for each child.
I find them in circulation often. Interesting how some cant find any.

I just learned that in 2010 when Haiti had the big earthquake, Hillary Clinton ordered that huge quantities of 2009 coins still sitting in the FR’s vaults were to be sent to them. Haiti had NO banks, no places for the public to cash checks or get change for their businesses, etc etc etc – so good old Hillary raped our treasure and sent them our coins. I have heard that Haiti bargained away the nickels to another country for the bullion value which exceeded the 5 cent face value. In short, they were melted down and the lid has… Read more »