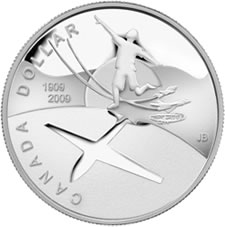 The Mint has dedicated its 2009 Silver Dollar to the centennial of flight in Canada and today presented this coin in personalized souvenir frames to the dignitaries attending this historic celebration: Lieutenant-General Angus Watt, Chief of the Air Staff, Dr. Roberta Bondar, Honorary Chairman of the Silver Dart Legacy Committee, as well as family and official representatives of the founders of the Aerial Experiment Association.

"The Royal Canadian Mint is passionate about celebrating defining moments in Canadian history and the centennial of the first powered flight in Canada is an event which deserves permanent recognition on a beautiful new silver dollar," said Ian E. Bennett, President and CEO of the Royal Canadian Mint. "The Mint’s 2009 Silver Dollar also salutes the efforts of the tireless organizers and volunteers celebrating our nation’s centennial of flight in Baddeck, and across Canada."

"I am very pleased that the Royal Canadian Mint has honoured the centennial of the first powered flight in Canada by choosing this important event in Canadian history as the theme of its new 2009 Silver Dollar," said the Honourable Rob Merrifield, Minister of State for Transport. "Canadians feel great pride in the many aviation milestones which have followed the first flight of the Silver Dart and it is greatly rewarding to see its legacy immortalized on a precious silver keepsake from the Royal Canadian Mint."

Canadian history was made 100 years ago on the frozen surface of Bras d’Or Lake as the Silver Dart, Canada’s first successful flying machine, lifted off on its maiden flight with engineer and Baddeck native John McCurdy at the controls. From its Baddeck, Nova Scotia proving grounds, Alexander Graham Bell’s Aerial Experiment Association laid the groundwork for a century of Canadian aeronautic triumphs. The Royal Canadian Mint is proud to showcase Canada’s many flying icons, from the Silver Dart to Canada’s Snowbirds, on a beautifully contrasting proof silver coin.

In the background, the silhouettes of the Silver Dart, the Avro Arrow and a "Snowbird" Tutor Jet, illustrate Canada’s pioneering achievements in aviation. A close look at the overall design also reveals the ingeniously composed image of our beloved maple leaf. Limited to a mintage of 50,000, the 2009 Proof Silver Dollar is available for $47.95 CDN. The brilliant uncirculated version of this coin also retails for $39.95 CDN and is also limited to a mintage of 50,000.

The same design is reproduced on a selectively gold-plated proof dollar coin, which is exclusive to the Mint’s 2009 Proof Set.  Only 55,000 sets, with a suggested retail price of $99.95 CDN, are available world-wide.

These Royal Canadian Mint products are available at Baddeck’s Alexander Graham Bell National Historic Site as of February 23, 2009. They can also be directly purchased from the Mint at 1-800-267-1871 in Canada, 1-800-268-6468 in the US, or on the Internet at www.mint.ca. The coins are also available at the Royal Canadian Mint’s global network of dealers and distributors.