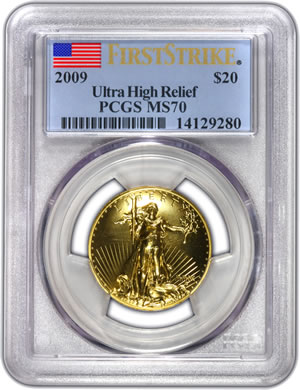 "We were thrilled to examine the first submitted example of this eagerly anticipated modern masterpiece.

It’s one of the finest designs ever created for United States coinage and a testament to the excellence of the United States Mint," said Don Willis, President of PCGS, a division of Collectors Universe, Inc. (NASDAQ: CLCT).

The coin was submitted by collector Charles Camp of Savannah, Georgia who said he was thrilled with the certification: "I’ve always been a big admirer of PCGS, and I think it’s a great thing."

In addition to the MS70 grade, the coin was given a First-Strike® (http://www.pcgs.com/firststrike) designation by PCGS and encapsulated in the company’s proprietary TriVue™ holder.

This coin series is now being added to the PCGS Population Report reference guide, and a video of PCGS and other leading numismatic experts commenting on the coin can be found online at www.PCGS.com (link to http://www.pcgs.com/articles/article_view.chtml?artid=5569&universeid=313&type=1)

"The TriVue™ holder not only provides long-term storage protection, it allows the coin’s obverse, reverse and edges to be easily seen.  With the PCGS certification of authenticity and grade, the value could dramatically increase over an ungraded, ‘raw’ coin," said Willis.

The design of the 24-karat, one-ounce Ultra High Relief Double Eagle Gold Coin is based on the famous and popular Double Eagle ($20 denomination) created by renowned sculptor Augustus Saint-Gaudens.

"The original 1907 Double Eagle is considered by many to be the most beautiful coin ever produced by the United States.  Despite Saint-Gaudens’ artistic masterpiece, the minting process at the time did not allow for mass production of ultra high relief coins, and his artistic vision was never fully realized," according to the Mint.

The 2009 version has a similar obverse to the 1907-dated coins with Liberty personified by a woman striding forward and a young eagle flying during sunrise on the reverse.  But there are distinct differences: four stars were added to the design to represent the states added to the union since 1907 and the inscription IN GOD WE TRUST has been added along with a small border in the design.  And of course, the date in Roman numerals, MMIX, is 2009.

For additional information about PCGS products and services, contact PCGS Customer Service at (800) 447-8848 or visit online at www.PCGS.com.

There’s an inherent weakness in coin grading revealed here. PCGS defines MS-64 to be an “average or above strike.” Given a sample size of only one, PCGS cannot yet know what an average strike looks like. To fall back upon MS-70 (full strike) for the very first coin examined is not reasonable. A better approach would have been to withhold grading until an appropriate sample has been examined upon which to base a grade.

How can they possibly grade the very first coin as an MS-70 when they have nothing to compare it to. This is proof of the grandstanding PCGS is notorious for. They are trying to make it sound like this was the first coin received when they know that it wasn’t. The receiver of the first shipped coin did not buy into the “First Strike” label as it is misleading.

I don’t understand how distribution of the new coin could take so long. I have a very low order number (below 30827200) and yet it’s now February 21 and I still haven’t received my coin? Why not? I called the Mint last night and was told “availability of blanks” was behind the problem. Keep in mind, I was able to get through to the Mint’s web site and place my order BY 12:15 PM EDT–but still no coin! What’s up with that, US Mint?? Very frustrating!

yeah, I don’t get how Charles Camp not only got the coin, but already has it graded. I too was one of the earliest people to register for the coin, and I have repeatedly seen the delivery time fall back from 2-6, to 2-13, to 2-20. I still have no confirmation of when my coin will ship. I am extremely angry. I also called the mint to try to get answers, and they were really snarky with me, telling me, it ships when it ships, with no real indication of how soon that would be, or where in the queue… Read more »

A fortunate person to actually receive the coin. Ordered one on January 22nd in the first two hours. So far I been given four different ship dates. Called today, February 24, because my most recent ship date passed last week just to try and get a ship date and was told to expect a six to nine month wait. Why then is the wonderful, straitforward, honest answering mint promising shipment of March 6 on their web site if you order the coin now? Certainly a well run, first class business, with everyone on the same page doing a great job… Read more »

That second employees at the end of rant should have read customers not employees. One should proof read before sending not after. Thanks, John B.

Charlie actually now has 2 coins in hand and both are graded as MS-70 First Strikes. NGC is having a real hard time grading anything they have seen so far as a 70 as the edges of the coins do have issues. I think we have a case here of PCGS overgrading these coins.

I think it’s fair to say that PCGS has graded a multitude of coins of all kinds/types and have the depth of experience, and knowledge to be able to assign a grade of MS70 to a coin that has all of the characteristics of that grade – without having to see lots of UHR’s to compare to. Come on….get real….it sounds like your just picking on PCGS when you push this lame argument!!!

Wanted to give everyone an update. My coin finally shipped to me! It is a beautiful coin. I am still angry it took so long to get it. I mean I did order the first day, but boy was it worth the wait. I also notice that my coin is faultless. Some people have been complaining of damaged edges or incomplete designs on the coin, but I haven’t seen any scratches or anything. It also amazes me how quickly it shipped. I got an email about shipping number, and the coin was literally to my door the next day. Unlike… Read more »

I received mine today and was none too happy. During shipping, the airtight came open and the coin and airtight top have been sliding around in the case halfway across the US. The coin is certainly beatiful, now to return and wait to see one that hasn’t had such a hard ride.

Received my 2009 UHRDE on 3-3-09. I was 20 minutes into the sale on 1-22-09, when my order went thru. The pkg was so heavy I thought I had received multiple orders. Allthough the coin appears flawless, It was a disapointment to see such a small coin with a high relief. The real 1907 high relief is much more impressive; I’m sure those who have seen them agree. This coin should have been made with a larger diameter. I will not have it graded because I believe most of these coins are MS-69; and MS-70 is an impossible grade. There… Read more »

My UHR 2009 came out of the circle holder when being shipped and was loose in the box. Upon examining the coin, I found tiny issues around the raised edge. These would only appear at certain angles with the light just right at 5x magnification I believe. They weren’t much and you really had to look for them in order to see. I can not believe these marks were a result from bouncing around during shipping. I believe they came from the mint that way. Does anyone know anything about this?