The United States Mint will reveal the 2009 Ultra High Relief Double Eagle Gold Coin at the ANA World’s Fair of Money® this week, but excited collectors don’t need to wait to see what the gold piece looks like. The U.S. Mint has provided high resolution images of the coin’s obverse, reverse and edge. 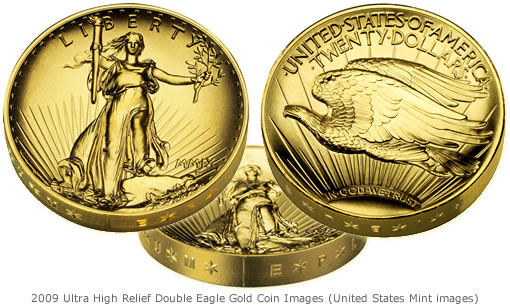 While highlighting the beauty of the 1907 Augustus Saint-Gaudens’ $20 Double Eagle liberty design, the coin photos makes the width of the gold piece immediately apparent. In piedfort like style, the $20 gold coin is about 50% thicker than other US Mint one-ounce gold coins.

According to the Mint:

Through 21st century technology and the vision of Director Ed Moy, original Saint-Gaudens coin plasters were digitally mapped by the United States Mint.

Using the digital design and die-making process, the Saint-Gaudens sculpture — in ultra high relief — has been updated to reflect the year 2009, an additional four stars to represent the current 50 states, and the inscription “In God We Trust,” which was not on the 1907 version.

Additionally, a small border was added for a more consistent edge

Sales of the 24-karat gold coin will begin early next year. Coin collectors need not worry about limited mintages, as none will be in place. However, the gold pieces will be issued only in 2009.

What is price of 2009 Ultra High Relief Gold Double Eagle Coin? Do they sell at Austin Rare Coins?

Koichi, The Mint hasn’t announced pricing yet and likely won’t until early 2009. It will be the spot price of an ounce of gold plus a decent premium. Hopefully, the premium won’t be outrageous…

I have mixed feelings on this one. I much prefer the 22k coins, since they can be handled. But it’s gorgeous for sure. The $20 face value is strange though… I know it’s historic, but doesn’t fit in with the face values on today’s bullion coins.

The U.S>int WEB site does not have the price of the new
2009 Ultra High Relief Double Eagle Gold Coin. Why not and
how much is it?

someone explain how a Business Strike differs from uncirculated strike.

what is the price of the 20 dollar coin today