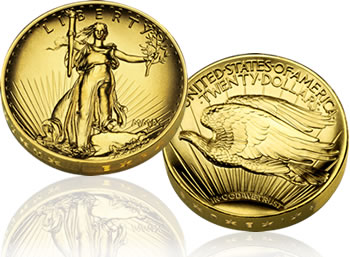 2009 Ultra High Relief (UHR) Double Eagle Gold coins have topped a new milestone and demand is stronger than ever in the month of August.

New United States Mint sales figures reveal several thousand of the 24-karat gold coins have been sold during the last few days alone. And since the US Mint began offering them on January 22, 2009, a total of 80,700 have been sold.

It is quite an accomplishment and a testament to the popularity of the UHR, given the hefty price tag of nearly $1,300 a piece to acquire one.

The special coin, a digitally reproduced version of Saint-Gaudens’ original ultra high relief 1907 Double Eagle gold piece, has been greatly helped by the elimination of the one-coin order limit. On July 27, the UHR limit was raised to ten per household. Since then, weekly sales have more than tripled, as the following table highlights:

July sales were averaging around 800 new coins a week. That has changed to an average of more than 3,000 per week in August.

In addition to the raised limit, the recent ANA World’s Fair of Money was a boon for sales. Several reports indicated the US Mint show booth was bottlenecked with attendees purchasing ten coins for $12,890 (no sales tax or shipping costs were charged). Many buyers then sold their UHRs immediately to dealers for a profit of some $50 per coin.

Collector demand is high for coins that receive the highest "70" grade, and they command premiums as a result. (For examples, check out current eBay UHR $20 auctions.) Those coins that fail the grade are still being sold for near the US Mint original price. Dealers had little to lose in buying in bulk, and the numbers show it.