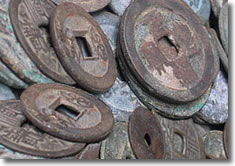 Published on the Federal Register and brought to light through the Ancient Coin Collectors Guild (ACCG), new U.S. import restrictions have been imposed on many ancient Chinese coins and other artifacts.

The Federal Register, which is the official source for notices by government agencies, published the State Department’s final rule that amends U.S. Customs and Border Protection (CBP) regulations to impose import restrictions on the following Chinese coins:

Zhou Media of Exchange and Tool-shaped Coins: Early media of exchange include bronze spades, bronze knives, and cowrie shells. During the 6th century BC, flat, simplified, and standardized cast bronze versions of spades appear and these constitute China’s first coins. Other coin shapes appear in bronze including knives and cowrie shells. These early coins may bear inscriptions.

Later, tool-shaped coins began to be replaced by disc-shaped ones which are also cast in bronze and marked with inscriptions. These coins have a central round or square hole.

Qin: In the reign of Qin Shi Huangdi (221-210 BC) the square-holed round coins become the norm. The new Qin coin is inscribed simply with its weight, expressed in two Chinese characters ban liang. These are written in small seal script and are placed symmetrically to the right and left of the central hole.

Han through Sui: Inscriptions become longer, and may indicate that inscribed object is a coin, its value in relation to other coins, or its size. Later, the period of issue, name of the mint, and numerals representing dates may also appear on obverse or reverse. A new script, clerical (lishu), comes into use in the Jin.

Tang: The clerical script becomes the norm until 959, when coins with regular script (kaishu) also begin to be issued.

Under the new rules, anyone entering the U.S. with such coins must have a valid Chinese export certificate or certifications proving the coins left China before the effective date of the new rule (January 16, 2009).

The FR notice indicates the restrictions were imposed "pursuant to an agreement between the United States and China."

The ACCG said in a statement that questions remain and that it will seek more information on the restrictions as part of its ongoing Freedom of Information Act lawsuit against the State Department.

"Based on materials received to date, there remains a serious question whether China actually asked for coins to be included in the request, or whether bureaucrats within the State Department’s “Cultural Heritage Center” added them on their own or at the behest of American archaeologists," the ACCG noted.

The ACCG is a non-profit organization committed to promoting the free and independent collecting of coins from antiquity.