The Professional Coin Grading Service (PCGS) has certified and encapsulated the 1793 Strawberry Leaf NC-3, Rarity-8 variety that became the most valuable United States large cent when it recently sold in a public auction by Stack’s for a record $862,500 on January 5, 2009.  It is graded PCGS VG-10. 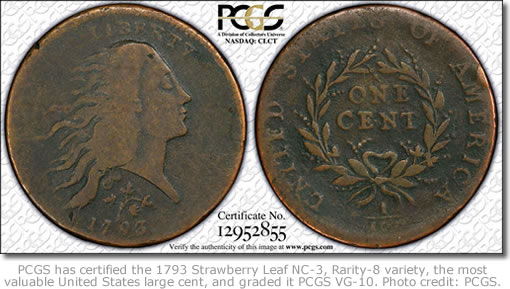 "This is the finest of the four known Strawberry Leaf large cents.  Three of them now are certified by PCGS; the fourth is in the collection of the American Numismatic Society (ANS) and not encapsulated," said PCGS President Don Willis.

"This finest known Strawberry Leaf variety now joins a prestigious list of record-setting, prominent early American copper coins certified by PCGS.  These include the Walter J. Husak collection that brought $10 million in a sale by Heritage Auction Galleries last year; the Ted Naftzger collection of large cents being sold at auction by Ira and Larry Goldberg Coins & Collectibles; and many of the major coins in the Daniel W. Holmes Jr. collection of early date large cents being offered by McCawley & Grellman through the Goldbergs later this year."

In early January, PCGS certified for protection and preservation the unique 1793 Wreath large cent variety Sheldon NC-5, Crosby 10-F from the ANS collection where it has resided in New York City for 63 years.  It will be publicly displayed with the Holmes collection at the Early American Coppers convention in Cincinnati, Ohio in April and at the American Numismatic Association’s World’s Fair of Money® in Los Angeles, California in August.

"The Stack’s catalog precisely described this Strawberry Leaf large cent as ‘a rare prize,’ and it is, indeed.  It’s also important to note that its pedigree includes a previously little-known collector, Roscoe E. Staples of Maine, who acquired the coin in 1941.  He should now be remembered for his bravery and heroic deeds as well as this coin," said Willis.

"Major Staples honorably served with the United States Marines during World War II, and was killed in August 1943 while leading his men in battle at Munda (now New Georgia) in the Solomon Islands.  This wonderful coin remained with the Staples family until 2004."

The previous record price paid at a public auction for a U.S. large cent was $690,000 for the Chapman-Naftzger specimen 1796 Liberty Cap, graded PCGS MS-66, in a sale conducted by the Goldbergs this past September.