The Perth Mint describes Leonov’s historic achievement: Exiting the Voskhod II capsule 500km above Earth, Leonov floated in space for more than 10 minutes before attempting to re-enter the airlock.  Alarmingly, his space suit had inflated, forcing the courageous cosmonaut to vent air before being able to squeeze back inside to rejoin compatriot Pavel Belyayev.

The coin’s coloured reverse design depicts space walking Leonov outside Voskhod II in orbit around a colourful earth. The obverse or heads side design features an outer Raphael Maklouf effigy of Her Majesty Queen Elizabeth II toward the top with the words "ELIZABETH II" to the left and "COOK ISLANDS" to the right. (The coin is issued as legal tender by the Government of the Cook Islands.)

The commemorative Orbit and Beyond series began with the 2007 Orbital Sputnik and followed with the 2008 Gagarin Space Silver Coin. Two additional coins are scheduled.

The following are Perth Mint provided technical specifications for the silver coin: 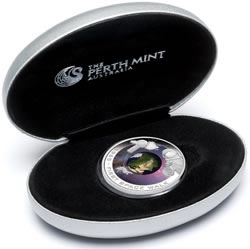 The Perth Mint has a limited mintage of 25,000 coins worldwide.

The coin is currently priced at:

The coin is also available through its many distributors.