The space shuttle Columbia was hailed as a great achievement when it first launched into orbit on April 12, 1981. The relatively short 54 hour mission was the culmination of decades of planning, research, design and funding that led to NASA’s first reusable space vehicle. 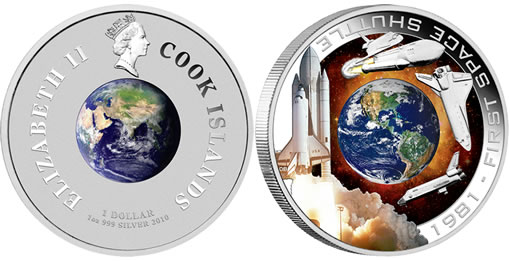 In honor of this momentous occasion, The Perth Mint of Australia has released the 2010 First Space Shuttle 1oz Silver Orbital Coin.

Named after the American Revolutionary War era ship of the same name (which had the distinction of being the first American vessel to circumnavigate the globe), Columbia’s construction began six years before its initial launch.

The entire series of orbiters, part of the Space Transportation System, was built on the premise of a large capacity vehicle which would launch vertically, be capable of extended missions, return to earth for a plane-like horizontal landing and be re-usable. This concept was a radical departure from the smaller single use capsules which had been used in the past.

Commemorating the first flight, the Space Shuttle Coin is the last in a series of five issued by the Perth for the government of the Cook Islands. All five "Orbit and Beyond" strikes mark a significant advance in man-kind’s exploration of space.

The first coin issued in the series came in 2007 as the 50th Anniversary of Sputnik Coin. It was followed a year later by the First Man In Space – Yuri Gagarin Coin. Then in 2009, the Perth released the third and fourth coin in the series with one celebrating the First Space Walk Coin and the other the First Man on the Moon Coin.

All of the coins in the series feature a unique design element. Each coin consists of two components with the first being a non-precious metal central core containing a colorized image of planet Earth. The second component encircles the core and is composed of one ounce of 99.9% pure silver with the reverse showing a colorized image of the theme of the coin, in this case the space shuttle Columbia. What makes the coin unique is the fact that the outer ring of silver is actually capable of rotating around the central core, thus giving the impression that the shuttle is orbiting the planet. 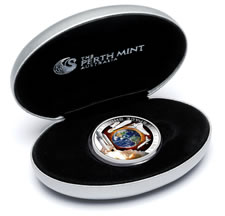 On the obverse, we still see the earth-like core, but surrounding it on the silver portion is a small portrait of Queen Elizabeth II along with the inscriptions ELIZABETH II, COOK ISLANDS, 1 DOLLAR, 1 OZ 999 SILVER and 2010.

The 2010 First Space Shuttle 1oz Silver Orbital Coin is available directly from the Perth Mint for AUS $97.73 and ships around the world with an elliptical-shaped display case.

Also included is a numbered Certificate of Authenticity showing the maximum mintage of 25,000. The entire package comes in an illustrated shipper with the shuttle shown as it is blasting into orbit.