The gold, 24-karat (.9999-fine) coins enters their third year of production. They began in 2007 with the same release schedule as the Presidential $1 Coins. 2009 brings a uniquess to the series in that an extra coin will be struck because President Tyler’s first wife, Letitia, died in 1822 and he remarried Julia in 1884.

"The First Spouse Gold Coin designs give us a glimpse into the fascinating lives of the women who supported, promoted and often advised the men who led our country," said United States Mint Director Ed Moy. 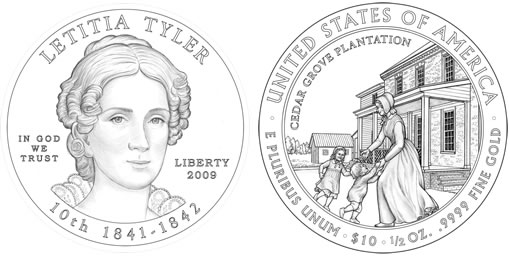 The reverse, designed by AIP Master Designer Susan Gamble and sculpted by United States Mint Sculptor-Engraver Norman E. Nemeth, depicts Mrs. Tyler and her two oldest children behind their Cedar Grove Plantation, where she and John were married in 1813. 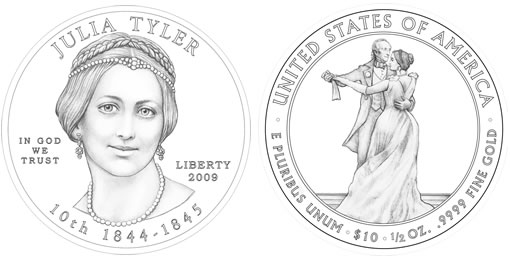 The reverse design depicts President and Mrs. Tyler dancing together at a White House Ball. 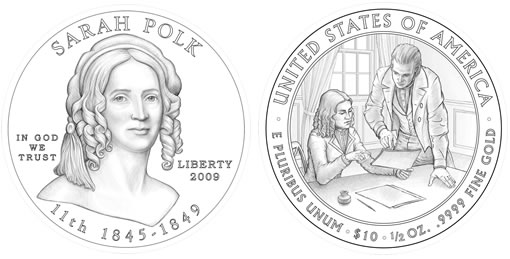 The obverse and reverse of the Sarah Polk First Spouse Gold Coin was designed and sculpted by Hemphill.

The reverse design depicts Mrs. Polk working in the White House in support of her husband’s career. 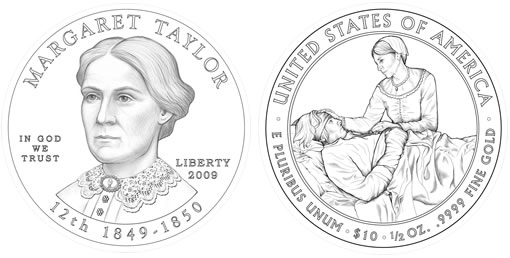 The obverse of the Margaret Taylor First Spouse Coin features a portrait designed by Hemphill and sculpted by Vickers.