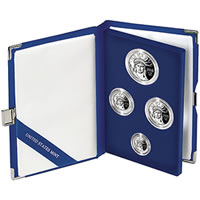 The single proof one-tenth ounce coin sold out Wednesday, with all previous options — in both proof and uncirculated — already depleted. The last reported mint sales figures for the single coin was 2,694.

The four-coin proof set includes one ounce, one-half ounce, one-quarter ounce, and one-tenth ounce coins struck in platinum for the price of $2,179.95. The Mint’s website has a delayed shipping notice of December 25 for the set, likely indicating its inventory level is already very low.

[Editor’s update: Eight collector bullion coins have now sold out within a week, including the above 4-coin set on Thursday morning. For more, read the Dec. 11 Mint gold and platinum coin sales figures.]