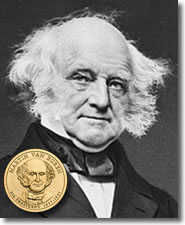 The ceremonial launch of Martin Van Buren Presidential Dollars will take place on Friday, the U.S. Mint said in an advisory to the media and public. The coins were released into circulation in mid November, but the Mint delayed the traditional public ceremony it conducts for new coins to coincide with Van Buren’s birthday on December 5.

United States Mint Deputy Director Andy Brunhart will say a few words and join other officials in handing out a free Presidential $1 coin to children under 18 years old. The public may exchange their money for $10 rolls.