The United States Mint is selling collector 2008 American Eagle platinum uncirculated coins with the "W" mintmark at significant premiums over their bullion content. But factors such as mintage totals are worthy of scrutiny before completely dismissing the coins as overpriced. 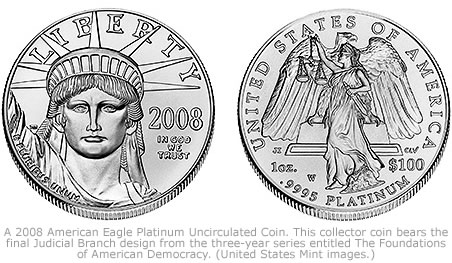 The US Mint offers one-ounce 2008-W American Eagle platinum uncirculated coins for $1,214.95, which is $372 higher than Tuesday’s New York closing spot platinum price of $843 an ounce. The difference is an unpalatable deterrent for making a purchase, which is further complicated given the still volatile commodity market.

In the last 30 days alone, platinum has been as high as $1,036 an ounce and as low as $756, with analysts all over the map on where it would or will go. Collectors who purchased a one-ounce uncirculated eagle toward the crest of the 2008 record platinum price of $2,250 and the peak US Mint price of $2,349.95 can best describe the hurt an unstable market can deal.

So why consider an eagle purchase now when platinum has been far from stable, on top of Mint markups that some equate to price gouging?

For one thing, an eagle platinum mintage of only 1,584 stands out, as do other 2008 uncirculated "W" one-ounce bullion coins. The Mint has sold over 392,000 American Eagle Silver and over 4,400 American Eagle Gold collector coins.

In contrast, final mintage totals for the same 2007 coins were 563,771 silver eagles, 24,902 gold eagles and 4,425 platinum eagles. Naturally, sales of the 2008 coins are still occurring. But the contrast of gold and platinum quantities is already striking, with some 20,000 fewer gold and nearly 2,900 less platinum uncirculated coins minted to date.

Factors to consider in buying

Clearly, high US Mint premiums have lowered 2008 sales. As has the inability to purchase coins during Mint periods of suspended sales — in some cases, for several months — to readjust prices in the wake of bullion swings.

In addition, there is the Mint’s recent memo indicating that 2008 platinum bullion coins ( non "W" mintmark coins sold to authorized dealers) are being produced from remaining blank supplies, and will cease when depleted. The availability of blanks for collector versions would appear to be in question. The Mint already removed the 1/10th ounce Eagle Platinum proof coin.

These factors provide a greater expectation that far fewer platinum collector eagles will be produced, and offer a better prospect of rising in value in the coming years.

Also for consideration, the 2008 American Eagle platinum coins bear the final “Judicial Branch” design within the three-year platinum coin series entitled "The Foundations of American Democracy." Starting in 2006, each year celebrated one of the three branches of government.

A coin’s true value is what someone is willing to pay for it. To date, fewer collectors are judging the platinum eagle as valuable as its listed price. Tomorrow may be another matter.

There is no crystal ball foreseeing where platinum prices are headed. Nor is it known when the Mint will halt 2008 sales. Spending nearly $400 above a modern coin’s intrinsic bullion value based solely on the chance of an eventual price increase is risky. Yet, sometimes risk pays off with rewards.

The Mint’s current price is likely most bearable to collectors who enjoy the uncirculated platinum series and have actually paid more to purchase one of coins in the past.