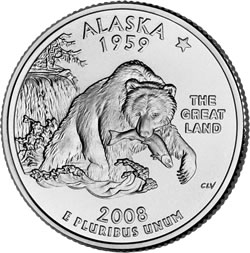 The ceremonial launch of the commemorative Alaska state quarter will occur at the Alaska State Fair, the United States Mint announced Thursday.

The reverse or tails side of the coin features a grizzly bear emerging from the water clutching a salmon in its jaws.  The North Star is depicted above the inscription “The Great Land.”

Additional inscriptions are “Alaska” and “1959,” which is the year the state was admitted into the Union.

Like past ceremonial releases, children under 18 years of age will receive a free, shiny new Alaska quarter. Everyone else in attendance may exchange their money for new $10 rolls of the quarter-dollars.

A highlight for coin collectors will be the Public Coin Forum, which will be held the evening prior to the ceremonial launch. The forum offers an excellent opportunity to express opinions and ask questions about forthcoming U.S. Mint coins and programs.

The successful 50 States Quarters series ends this year with the release of the Hawaiian state quarter in November. New D.C. and U.S. Territory quarters will continue in 2009.

Time and location for ceremonial release and coin forum

The following time, location and information was provided by the Mint for the Alaska ceremony and public coin forum: