Banknotes or Currency Articles Bowers and Merena to Bring Over 4,300 Rare Coin and Currency Lots

Bowers and Merena’s Big Finish for 2008 Brings more than 4,300 lots to the Official Auction of the Baltimore Coin and Currency Convention in November. Highlights Including the Exceptional 1870-CC Double Eagle Rarity and One of the Two Highest-Graded 1802 Quarter Eagles, Along With a New Discovery 1795 Reeded Edge Cent 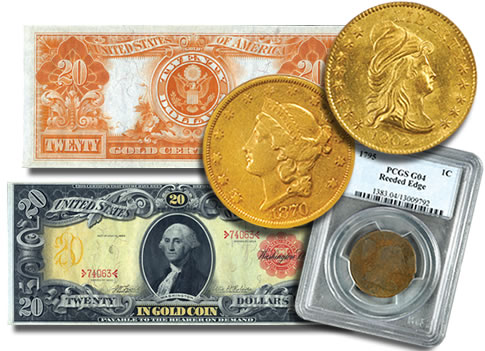 IRVINE, Calif. – Bowers and Merena Auctions, America’s leading rare coin and currency auction house, finishes strong for 2008 as Official Auctioneer of the Baltimore Coin and Currency Convention for the third time this year, with their upcoming auction scheduled for November 18-22, 2008, at the Baltimore Convention Center.

Bowers and Merena will continue their longstanding association with the convention into 2009 and beyond with three more official Baltimore auctions in 2009. This November auction will present more than 4,300 coin and currency lots during five sessions.

Leading the way is an exceptionally attractive Double Eagle rarity at lot 4723, an 1870-CC $20 Winter 1-A in NGC EF-45. Rivaling only the 1870-CC Eagle for this honor, the 1870-CC is widely regarded as the rarest gold coin struck in the Carson City Mint. Federal records indicate that only 3,789 Double Eagles were struck in the Carson City Mint during 1870, and virtually all of those coins have since been lost. At the Choice EF level, the coin offered here qualifies as Condition Census for this rare and extremely challenging issue.

"This is really a very appealing example of the issue and a coin that is destined for inclusion in the finest collection of CC-mint and/or Liberty gold coinage," notes Steve Deeds, president of Bowers and Merena. "The surfaces are among the most appealing that we have ever seen for a ’70-CC Twenty, very impressive."

An exciting new discovery coin is found at lot 1143, an exceedingly rare 1795 S-79 Reeded Edge Liberty Cap Cent, one of just six pieces known to exist and the only example certified by PCGS or NGC. This 1795 S-79, Rarity-7+, Reeded Edge is graded Good-4 by PCGS and is mounted in a special PCGS holder that allows easy viewing of the edge, where the all-important reeding is easily seen. One of the most important large Cents of any type, date or variety ever offered by Bowers and Merena, this coin is sure to command a strong price from dedicated early Copper collectors.

"This is really a unique opportunity to acquire one of the rarest large cents ever minted," Deeds said.

One of the two highest-graded 1802 Quarter Eagles draws attention at lot 4309, an 1802/’1′ Capped Bust Right Quarter Eagle, BD-3, HBCC-3009, Rarity-5, in MS-65 by NGC. NGC Census on this visually impressive example of the issue is just 2 and none are finer, with the highest-graded examples known to PCGS being MS-63s.

Currency enthusiasts will be treated to an exceptional selection of more than 800 lots. Topping the list is lot 5451, an important and finest known Fr. 1179 $20 Technicolor. This remarkable note, Fr. 1179, 1905 $20 Gold Certificate, PMG Superb Gem Uncirculated 67EPQ, enjoys a PMG population of just 1, none finer, with PMG grading only two 66s and the finest PCGS grade being a 64. The note itself has amazing color and eye appeal.

Interested bidders are also encouraged to view lots and bid in-person at the live auction November 18-22, 2008, or live online through the Bowers and Merena website. A complete auction and lot viewing schedule is available at www.bowersandmerena.com or by calling 800.458.4646.