Highlights of Bowers and Merena’s Baltimore Rarities Sale, which is prior to ANA World’s Fair of Money, include extraordinary 1866-S No Motto Liberty Double Eagle in NGC MS-60 and elusive 1808 Capped Bust Left Quarter Eagle in NGC MS-61 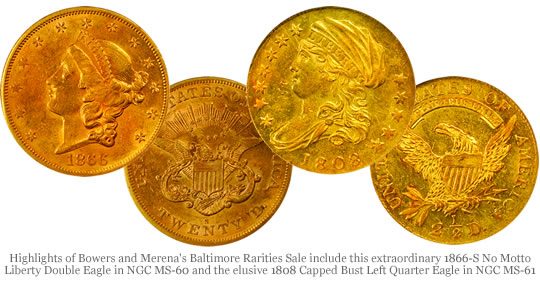 IRVINE, Calif. – Bowers and Merena Auctions, America’s leading rare coin auction house, will host their Baltimore Rarities Sale in July at the Baltimore Marriott Waterfront, just prior to the ANA World’s Fair of Money. The auction of nearly 1,300 lots will be presented on Saturday, July 26, with lot viewing scheduled for Thursday to Saturday, July 24-26, and lot pick-up on Sunday, July 27. The catalog includes approximately 1,100 coin and 200 currency lots.

At the top of the highlights list is an impressive 1866-S No Motto Liberty Double Eagle graded MS-60 by NGC. It is described as a High Condition Census example, one of only three Mint State examples known to PCGS and NGC, and the type of Mint State rarity that is not often available to collectors for purchase.

Although Winter and Crum were unaware of any Mint State examples of the 1866-S No Motto in numismatic circles, PCGS and NGC have since certified a few coins at that level. The total is limited to just three pieces, however, the finest of which grades only MS-61. Clearly a very rare coin from both absolute and condition standpoints, the BU example that Bowers and Merena is offering represents a fleeting bidding opportunity for the advanced collector of 19th century U.S. gold coinage.

Additional highlights of note include an 1808 Capped Bust Left Quarter Eagle, BD-1, HBCC-3017, the only known dies, Rarity-4, graded MS-61 by NGC. This is an elusive and significant One-Year Type, one of no more than 150 Capped Bust Left Quarter Eagles that are estimated to remain to meet the demand of both early gold specialists and type collectors, the latter group, in particular, representing an ever-growing segment of the numismatic market.

"Bowers and Merena just returned from a very successful June auction in Baltimore where we realized over $6.2 million, and there was already a lot of talk and enthusiasm among attendees to return to Baltimore in July," said Steve Deeds, president of Bowers and Merena.

"We have a fantastic selection of very special coin and currency lots and we are looking forward to presenting an exceptional rarities auction that serious collectors will really appreciate."

All lots and images in the Bowers and Merena Baltimore Rarities Sale will be viewable online by early-July at www.bowersandmerena.com, and printed catalogs are available upon request by calling 800.458.4646.

Interested bidders are also encouraged to bid in-person at the live auction on Saturday, July 26, 2008, or live online through the Bowers and Merena website. A complete auction and lot viewing schedule is available at www.bowersandmerena.com or by calling 800.458.4646.

For more information about Bowers and Merena and the Baltimore Rarities Sale in July, call 800.458.4646.  For media inquiries, ask for president Steve Deeds.  Complete prices realized for all past auctions are available at www.bowersandmerena.com.