IRVINE, Calif. – Bowers and Merena Auctions, America’s leading rare coin and currency auction house, will bring nearly 2,500 lots of fine coins and currency to Baltimore, Md., for the Official Auction of the Baltimore Coin and Currency Convention scheduled for June 10-13, 2009. 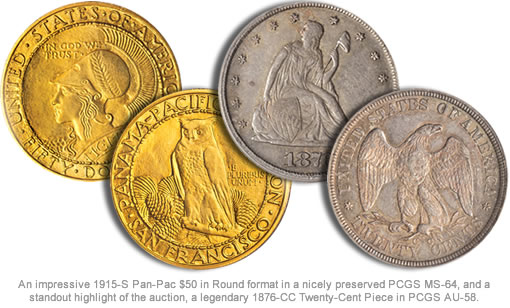 The standout highlight of the auction is lot 757, an 1876-CC Twenty-Cent Piece in PCGS AU-58 with a fascinating history. Believed to be one of perhaps just 12 to 20 examples known, this specimen was acquired in Virginia City, Nev., by Gold Rush "Forty-Niner" John Seagraves Pick and has been kept in the Pick/Jurgensen family for the last 133 years. As a PCGS AU-58, this important piece is the only circulated 1876-CC Twenty-Cent piece known to PCGS and NGC. It was also previously certified AU-58 by ANACS from a submission that dates to the early 1990s.

The Pick/Jurgensen Specimen appears to have been acquired in circulation by John Seagraves Pick in 1876 and has been passed through five generations of his family, first to his son, John William Pick, who was born in Virginia City in 1872. He then passed it to his daughter, Virginia Pick Jurgensen, who was born in 1904 and survived the San Francisco earthquake when she was just two years old; she kept the coin for 47 years until her death in 1993, when it passed to her son Wilfred Pick Jurgensen. Upon Wilfred’s passing at age 74, the coin passed to his widow, Jean Lorraine Jurgensen, and son, Steven Frederick Jurgensen.

"This is a very special coin and it is an honor to offer it at auction to the numismatic world for the first time ever," said Steve Deeds, president of Bowers and Merena.

"Aside from the awesome rarity of the issue and the exceptional condition of this circulated example, its five-generation history tells a story that is rich with Americana and will be well appreciated by collectors and enthusiasts.

The opportunity to acquire an example of the 1876-CC Twenty-Cent piece is infrequent, and the added story behind this particular specimen makes it even more extraordinary and sought after."

Additional highlights in the Official Baltimore Auction in June include lot 1071, an impressive 1915-S Pan-Pac $50 in Round format in a nicely preserved PCGS MS-64. This is the rarest classic gold Commemorative coin in the finer Mint State grades, with a net mintage of just 483 pieces. As a problem-free 64, the coin offered here is a superior representative of the type.

Also noteworthy is lot 3763, an appealing 1796 Bust Right Ten, BD-1, HBCC-3174, Taraszka-6, the only known dies, Rarity-4, graded AU-55 by PCGS. The 1796 is much rarer than the 1795 in Mint State, and Choice AUs in 55 and 58 represent the finest that is usually available to advanced gold collectors. With minimal rub to overall sharp features, this piece is solidly graded at the Choice AU level, backed by a PCGS Population of 18 with 22 finer, just 11 of which are Mint State.

Interested bidders are also encouraged to view lots in Baltimore June 10-12, 2009, and bid in-person at the live auction June 11-12, 2009, or live online through the Bowers and Merena website. A complete auction and lot viewing schedule is available at www.bowersandmerena.com or by calling 800.458.4646.