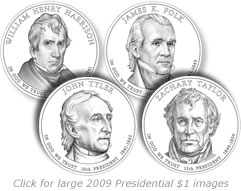 U.S. Sen. Roger Wicker has more reason to celebrate than most for the new 2009 Presidential Dollar designs the United States Mint released on Wednesday. He introduced the amendment calling for the motto "In God We Trust" to be relocated from the edge of the $1 coin to its face. (View up close 2009 Presidential $1 Coin design images.)

"The words of these two phrases symbolize who we are as Americans and should not be relegated to the rim of this new, high-profile coin. They should continue to be proudly and prominently displayed," said Mr. Wicker in 2007 when he was a member of the U.S. House of Representatives."

In late 2007, Congress passed Mr. Wicker’s amendment within the Consolidated Appropriations Act, which included a provision directing the Secretary of the Treasury to move the inscription “In God We Trust” from the edge of the Presidential $1 Coin to the obverse (heads side) or reverse of the coin.

After the U.S. Mint’s revelation of the new 2009 Presidential Dollar designs with the motto on the coin’s obverse, Sen. Wicker commented,

"The words ‘In God We Trust’ symbolize who we are as Americans and should not have been relegated to the rim of the new $1 coins. It was wrong to obscure these important, symbolic words from view.

I am glad my amendment received the support it did to ensure these important words will be displayed on the face of future presidential $1 coins, starting with the coins the U.S. Mint revealed today."

Mr. Wicker said the phrase has been prominently displayed on U.S. currency since 1864, and it was important that it continued with the new $1 coins.

The Presidential $1 Coin Program started in 2007 and features a series of four different designs each year, with each honoring a former President in the order they served. The 2009 Presidential $1 Coins honor William Henry Harrison, John Tyler, James K. Polk and Zachary Taylor.

To date, more than 1.3 billion $1 coins have been minted for circulation that bear the images of the first seven Presidents. The 2008 Martin Van Buren Presidential Dollar is scheduled for release on November 13.

How on EARTH did we ever defeat the Nazis in WWII when NOT ONE American bill had the motto on it????? We sent millions of soldiers into battle with GODLESS MONEY in their pockets! Oh, the horror! Oh the ignominy!

The far right’s fixation on symbolism over substance never ceases to amaze.

This is a American coin, not an American bill. “In God We Trust” was on every United States Coin minted during WWI and WWII as well as the Korea War and Viet Nam. Please get your facts straight before inserting your foot into your mouth.

Uh, I’ve never like the taste of feet. And I *did* check my facts … I’ve been collecting for over 50 years and definitely know the history of US currency. My comment referred to BILLS. In fact, that’s why I used the word B-I-L-L, not “coin”.