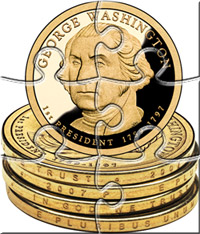 The new Presidential $1 coins and the words "In God We Trust" are back in debate. A new legislative bill, S.2417, has been placed on the table and seeks changes to the motto’s placement.

Since the beginning of its mintage, the new dollar coin has faced extra scrutiny due solely to those powerful words, or lack of them. While a very small segment of the population would just as soon see the motto forever removed, most appreciate the significance of it appearing on coinage since the Civil War.

Then there are many who take issue with the new $1 coin’s design, believing the motto lacks prominence on its edge.

Mint errors with the Presidential $1 coins arose the public

The U.S. Mint inadvertently heated the situation further earlier in the year when some new Washington and Adam Presidential dollars started exiting Mint doors with the inscription completely missing. Or, in some cases, the letters were off center, weakly struck, partially struck, doubled or even inverted.

Hobbyist generally didn’t and don’t mind the Mint’s embarrassing blunders. Of the nearly billion presidential dollars minted this year, statistically speaking, the error coins classify as rarities. Many are worth more than their weight in gold. However, unlike past minted coin errors, the mistakes have appeared in mainstream news headlines.

That resulted in outrage from many who hadn’t yet seen a new Presidential $1. Some thought the new presidential dollars were purposely designed to exclude "In God We Trust". At the very least, it awakened a call to take a closer look.

Seeing the $1 coins in their own eyes and perhaps taking some heat from constituents, legislatures began entering bills and amendments to move "In God We Trust" from the coin’s edge to its face.

Finding and following each bill or amendment is like trying to put together a 10,000 piece jigsaw puzzle. And while bills and amendments have appeared, they seem to silently slip into forgetfulness.

The three that are at least most visible:

H.R. 2510 went into an apparent comma. House Amendment 483 passed by a vote of 295-127 on the same day it was introduced. Since then, action has disappeared. S.2417 was introduced just days ago and this time into the Senate. To date, it’s been read twice and referred to the Senate Banking, Housing, and Urban Affairs.

Given the history of previous attempts, the Vegas odds on it passing could be on the risky side.

I was happy to see that In God We Trust will be put on the $1.00 coins When I had heard that it was not.I was not happy. When we as a nation take God out of our schools,legistation and goverment. How can we call our selves a Nation. What is the frist thing we do when a loved one is hurt. We pray to God for help. We must all pray that God will want to help us as we as a Nation have taken him away from every thng that is right. I must say God Bless you… Read more »

How my heart breaks to find more and more that the United State of America, wants in God we trust removed. how will we continue to be the land of the free, without trusting in God. To who ever, took in god we trust from our coins, I pray for them.

In God we trust is as American as it gets.Please leave it on our coins and paper money.
Thank you

In God we trust need to remain on all coins. That’s what our county was founded on . Remove God and we will fall!

HELLLLOOOOOO … The motto didn’t appear on any coins until the 2¢ piece was issued in 1864. It wasn’t on all circulating denominations until the first half of the 20th century. It wasn’t on ANY paper bills until the 1957 series of $1 bills and 1963 series of $5 bills. I have no problems with the presence of the motto, but it’s NOT something the Founding Fathers demanded or even considered. Think about it. We won WWI and WWII without the motto, but lost Vietnam WITH the motto, so it somehow seems to me that whether it’s on our money… Read more »

The motto needs to stay on. The point isn’t about when it was approved but that it stay there. In the U.S. the majority rules, that is democracy. If the word God offends you remember, you are in the U.S. and as such you are here by choice not because anybody forced you to come here. When In Rome Do As….does it ring any bells!

In God We Trust, needs to stay on all of our currency. I agree with Ronald Reagan, “If we ever forget that we are One Nation Under God, then we will be a nation gone under.” I personally feel the act of moving the motto to the edge of the coin was another step toward it’s removal. Our founding fathers may not have had, “In God We Trust”, on their currency in their day but,they had that motto in their heart. I’d rather each person have Jesus in their heart than to have it etched on a coin, yet it’s… Read more »

This is by far the most idiotic question to pursue at this time due to the economy problems. A stupid request unless the mint is creating all new casting molds. As far as the “in God we trust” our government is founded on freedom of religion, and all religions have a God or Gods, so if one is to carefully read each coin as they handle it, the phrase is quite adaptable to one’s own interpretation. Now whoever brought up the question can sit back, relax, get a life and start doing something to HELP the current problems of the… Read more »

The Extreme Right needs to get a life and stop trying to forcing their Savonarola / Torquemada version of faith on the rest of us. 45 million people w/o health care, billions being spent on 2 wars overseas and bailing out failed companies, life savings disappearing … but all they can fuss about is where a motto is on a coin.

George Washington said:
“It is impossible to rightly govern the world without God and the Bible”.

In my lifetime we have sacrificed many precious lives to help those that want
righteousness. Can we ever teach our children any better way? The rebellion is in our mitts, God is watching over us, he is the umpire. Make the WORD meaninful.