The Perth Mint revealed their stunning and newly designed 2009 silver bullion coins this week that include the series of Australian Koala Silver Coins and Australian Kookaburra Silver Coins. Both coin series are legal tender, struck in 99.9% pure silver, include guarantees in weight and purity, and offer intriguing designs with differing sizes. 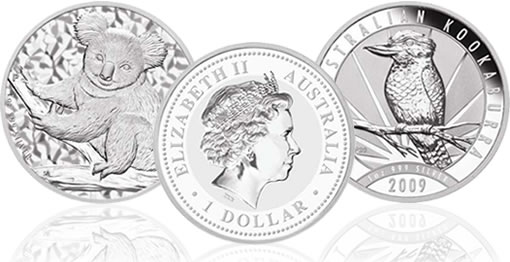 Other common elements include the obverse or heads side design depicting Ian Rank-Broadley’s effigy of Her Majesty Queen Elizabeth II. In addition, both series have The Perth Mint’s traditional “P” mint mark, a 109 year-old symbol “embodying its commitment to minting excellence.”

Collectors will not have to wait until 2009 to purchase these investor and collector bullion coins. October 1, 2008 is the worldwide release date.

The 2009 Koala silver coins include the fractional 10oz, 1oz, and 1/2oz sizes. The reverse or tails side of the coin depicts a young koala — one of Australia’s most endearing animals, clutching a branch and surrounded by a contrasting, multifaceted background.

There are no limits set for the 12 months the coins are minted.

The 2009 Kookaburra silver coins include the fractional 1 kilo, 10oz, 2oz, and 1oz sizes. The reverse or tails side of the coin has an inner ring that portrays the laughing kookaburra — a native bird synonymous with the Australian bush, clutching a tree branch.

"THE AUSTRALIAN KOOKABURRA" inscription encircles the coin’s outer ring. An augmented ‘P20’ mint mark is etched on the reverse as well to signify the coin is part of the 20th annual issue.

The silver coin series specifications by size are:

The silver coins may be purchased through The Perth Mint distributers. The 2009 Koala 1 oz silver coin is found directly on the Mint page:

How can I purchase some 20z australian coins? Or where can I purchase them – is it possible in the states – and does anyone else besides Australia make a 2 Oz coin?

Does anyone know how many of the 2009 Kilo Kookadurra were minted?

[…] past and current year issues, check out the koala bullion coins from 2009 and from […]