The Royal Australian Mint has launched three new websites with each sporting a different theme and coin products. The offerings range from commemorative coins honoring the centenary of Sir Donald Bradman’s birth and the 25th anniversary of Australia II’s win in the American’s Cup, to an exclusive club membership with product discounts. 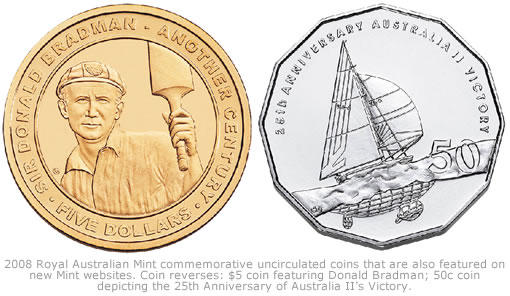 The Greatest Century of All website honors Sir Don Bradman. It provides career highlights, statistics and achievements and an interesting interactive comparison with other modern cricket players.

Coin collectors will be interested in the $5 uncirculated coin depicting "The Don." The high quality Aluminum Bronze coin commemorates the centenary of Sir Donald Bradman’s birth on 27 August 1908.

The design captures "The Don" in a familiar pose; saluting the crowd after scoring another century.

The Americas Cup Victory website celebrates the 1983 moment when Australia II won the America’s Cup. The website include several video segments, including race footage and the Australia II crossing the finish line.

The Australia II won the final race by just 25 seconds and was the only challenger to beat America in the America’s Cup 132 year history.

To celebrate the 25th anniversary of the win, the Royal Australian Mint has launched an unlimited 50 cent uncirculated collector coin made from Cupro Nickel.

The coin’s reverse features the starboard side of Australia II with spinnaker and mainsail carrying the boat to victory. A unique magnified underwater view captures the controversial winged keel as taken from technical drawings.

In addition, according the Mint,

A very exciting feature that makes this a truly remarkable collector item is the packaging. The blister card transforms into your very own winged keel. This will perfectly display the 50 cent coin and keep it shipshape for many years to come.

The Little Dinkums website is an exclusive member website that will offer 25% off on upcoming dinkum merchandise, special club member offers, and regular updates on new coin releases.

Since Royal Australian Mint makes foreign coins for export to countries like New Zealand,Papua New Guinea,Tonga, and Cook Island. So where I can buy coin of Papua New Guinea or Tonga?