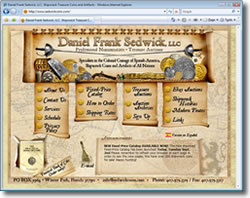 Daniel Frank Sedwick, LLC, specialists in colonial coinage of Spanish American, shipwreck coins and artifacts of all nations, has announced a newly re-designed website of treasures for sale.

Returning visitors will immediately notice the new site’s intuitive navigation and faster loading times. But there is much more.

Many of the changes resulted from customer suggestions, according to Mr. Sedwick. Full-time dealer Augi García-Barneche, who specializes in Spanish colonial coinage and manages the website, summarized several key improvements:

"Enhancements like better navigation and more vivid graphics accompany hundreds of treasure items for sale, including gold and silver coins and ingots from shipwrecks, Spanish colonial coins (cobs, pillars and busts), shipwreck artifacts, plus (for the first time) general world coins of historical importance and even some promotional items."

Among the numerous enhancements, numismatists are sure to enjoy the site’s Fixed-Priced Catalog. If, for nothing else, to check out the excellent photos of gold and silver cobs, shipwreck coins, silver coins, and promotional specials.

The wealth of information in the site’s Shipwreck Histories section offers fascinating reads as well.

Visit www.SedwickCoins.com for more information and to browse the many changes.

Daniel Frank Sedwick, LLC is a full time dealer specializing in the colonial coinage of Spanish America as well as shipwreck coins and artifacts of all nations.

In addition to publishing several catalogs per year, Mr. Sedwick is a regular vendor at major international coin shows, including FUN, CICF, and ANA. Until early 1996, Mr. Sedwick worked in partnership with the late Dr. Frank Sedwick, who began the business in 1981 and became known as a pioneer in the field of Spanish colonial numismatics with his book, The Practical Book of Cobs.