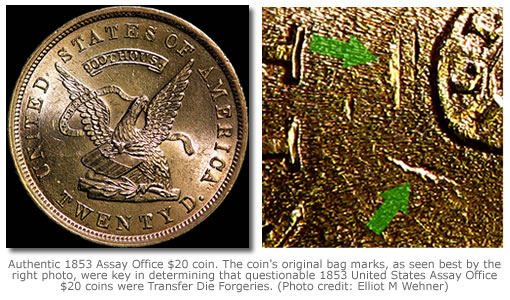 The panel’s discussion was the main program at the annual meeting of the Society of Private and Pioneer Numismatists held in Baltimore, Maryland Saturday, August 2nd, 2008 as part of the American Numismatic Association’s World Fair of Money.

The Transfer Die Forgeries first appeared during the late 1950’s, "discovered" by Paul Franklin through a bank teller in Arizona. Franklin and John J. Ford Jr. sold hundreds of these pieces throughout the 1960’s as genuine pieces struck in San Francisco by the U.S. Assay Office in 1853.

An arbitration hearing of the Professional Numismatists Guild in the late 1960’s ruled that the pieces were not proof, but could not come to an agreement on the authenticity or vintage. For the next forty years the authenticity of the Franklin Hoard pieces lay in question.

In 2006 Donald Kagin, Ph.D. and David J. McCarthy of Kagin’s, Inc. of Tiburon, Calif. were processing images of one of Kagin’s client’s collection for the upcoming 2nd edition of Private Gold Coins and Patterns of the United States. McCarthy noticed that the client’s unquestionably authentic 1853 Assay Office $20 bore bag marks in the same location as repeating depressions on the questionable Franklin Hoard coins.

The marks of the original coin appear on all of the Franklin pieces, despite the best efforts of the forgers to evidently hide them with die polish. The panel agreed that the discovery of this authentic coin and the matching of the marks was the "smoking gun" in the case, condemning all of the Franklin pieces as the products of a one-to-one transfer die made from this authentic host coin. 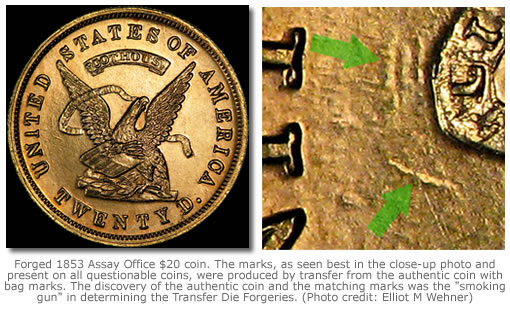 At the conclusion of the discussion moderator Kagin asked the panel to accurately and succinctly title the coins in question. The experts unanimously agreed these pieces are best described as Transfer Die Forgeries. The panel also agreed efforts need to be taken to educate the numismatic community about these false coins.

The approach and decision of the panel is historic, creating a model for future forums to discuss other numismatic controversies. The SPPN would like to seek answers to other mysteries and controversies in the field of pioneer numismatics and is soliciting future topics for discussion.

About the Society of Private and Pioneer Numismatists

The Society of Private and Pioneer Numismatists has been a non-profit organization since 1992.  Membership is $35 per year and includes a subscription to the Brasher Bulletin, a thrice annual publication featuring articles by leading Private & Pioneer coinage experts and historians.  SPPN is operated from the offices of Kagin’s, Inc. in Tiburon, CA. For further information, please contact Kagin’s, Inc. at 888.8KAGINS or 415.435.2601.