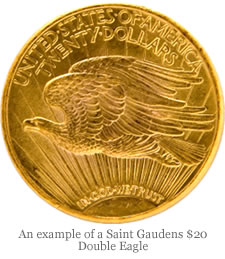 United States Mint Director Ed Moy announced plans to bring back the Saint-Gaudens’ original ultra-high relief Liberty $20 Gold Piece. (An excellent photo of the front and back of such a coin may be seen in the recent Heritage Auction press release, Proof Gold Stars at Heritage’s $10 Million Phoenix ANA Signature Auction.)

The Saint-Gaudens’ designed coins are thought by many to be the most beautiful ever minted in the U.S. The collector coin will be made in 24-karat gold and launched in 2009.

The historical facts of the Saint-Gaudens design and resulting minted coins are intriguing. According to the United States Mint to Recreate a Masterpiece press release statement:

Maintaining the full artistic integrity of the Saint-Gaudens design was an arduous undertaking in 1907.  The United States Mint’s first attempt-a 34-millimeter ultra-high relief coin with Roman numerals-required the coins to be ‘squeezed’ into a press and annealed numerous times.  The coining process was impractical for mass production, and approximately 19 coins of this variety are known to exist.  These coins are now mostly in private ownership.

The United States Mint’s second attempt to produce Saint-Gaudens’ design-a 27 millimeter, ultra-high relief coin with Roman numerals-was in fact two $10 Gold Eagle planchets melded together.  The resulting coins were twice as thick.  The United States Mint had no authority to strike coins of this specification in 1907, so it melted all but two or perhaps three of these coins.

The United States Mint’s third attempt-a high-relief, 34-millimeter coin with Roman numerals-produced a coin with reduced relief that required less metal flow to fill the design and was more practical for mass production.  Approximately 12,000 coins were made for collection.   Later, in 1907, an additional 361,000 coins with Arabic numerals and a lower relief were produced for circulation.

Recreated High Relief Saint Gauden Gold Coin is on my buy list second only to Gold Buffalo Coin. I never had chance to purchase $20 St. Gauden High Relief 1907 Gold Coin. This is my chance to buy the recreated version of this coin!