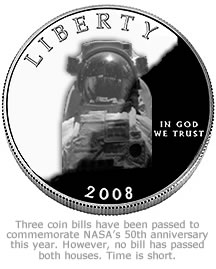 The House of Representatives passed commemorative coin legislation Tuesday that would issue silver and gold coins honoring NASA’s 50th anniversary this year. The legislation, H.R. 6455, was introduced and passed swiftly in five days.

Praiseworthy speed? Perhaps not… Consider first that H.R. 6455 is nearly identical to H.R. 2750, which the House had already passed in 2007. And for all practical purposes, it’s identical to the Senate’s June passage of S. 2159.

Before getting into why there are three bills, its more important to know what the passage of any one of them means to coin collectors. Each bill would authorize the United States Mint to issue:

The $50 gold coin would only be issued as part of a complete set with the 9 silver commemoratives. All coins would be 2008 dated to honor the 50th anniversary of NASA’s first day of operations on October 1, 1958.

Lateness and inaction cause problems

NASA’s 50th anniversary is this year, and legislation has yet to be signed into law. Even if a coin bill became law today, the United States Mint would be hard pressed to complete 10 coin designs, have them approved and then issue coins by year’s end.

In that respect, coin collectors can thank the Senate. Had they taken up last year’s House bill (H.R. 2750) sooner — after all, the House did pass it on July 30, 2007 — the Mint would be well on its way already.

But the Senate didn’t. However, Sen. Bill Nelson [D-FL] eventually acted. He crafted a new version of the House bill with modified coin issuance dates. That bill, S. 2159, passed the full Senate on June 19, 2008.

To compensate for lateness, three major provisions were added in S. 2159 that H.R. 2750 didn’t have:

S. 2159 also added a surcharge of $1 for each bronze medal duplicate sold.

With the Senate passage of the bill in June, one would expect the next action for NASA coins to involve either H.R. 2750 or S. 2159, and in short order. Not so.

Outside of about three sentences, each of these bills are clones of each other. Does something seem amiss in the back and forth process?

If there’s too much further delay, new legislation may need to be proposed celebrating NASA’s 51st anniversary.

Stayed Tuned for NASA Commemorative Coin. This coins will be issued next year. So wait and see in 2009, but the coins are dated 2008!

More appropriately would be coins dated 2009 for the 51st anniversary. 115 years ago we celebrated the 401st Anniversary of Columbus because we didn’t act in time. 🙂