One of the two known 1861-P "Paquet Reverse" Double Eagles will be displayed during the American Numismatic Association World’s Fair of Money® convention in Baltimore, July 30 – August 3, 2008. 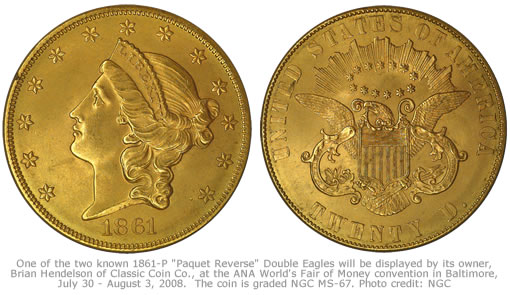 It will be the centerpiece of a 150-coin date and mintmark display of Types I, II and III Liberty Head Double Eagles from 1850 to 1907 presented by Monaco Rare Coins of Newport Beach, California at booth 644 in the Baltimore Convention Center.

"With the Smithsonian displaying its 1860 specimen at the ANA convention, it’s the perfect time and place to exhibit the finest known 1861 Philadelphia Mint Paquet $20 gold piece.  It will be a once-in-a-lifetime opportunity for many collectors to conveniently see both spectacular coins in one location in its former ‘home town,’ Baltimore," said Hendelson.

The "Paquet Reverse" is a short-lived tail’s side design with slightly taller, slender lettering, and is named after United States Mint engraver, Anthony Paquet.

For additional information, contact Classic Coin Co., at (908)725-5600 or online at www.ClassicCoinCo.com.