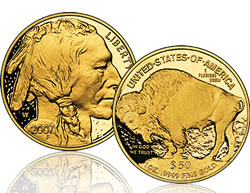 On Tuesday, July 22, the Mint will offer Buffalo proof and uncirculated coins in fractional weights of one ounce, one-half ounce, one-quarter ounce and one-tenth ounce.

The will also offer a set including all four coins. In affect, the new offerings follow the Mint’s American Eagle Gold coins program.

The following table provides a list of the Mint’s upcoming American Buffalo coin sizes and prices.

For reference, the spot price of gold earlier today was at $961, resulting in a comparative $100 premium for the one ounce uncirculated Buffalo coins.

The Mint indicates mintage and product limits for both the American Buffalo Gold Proof and Uncirculated Coins will be determined by customer demand. Their description of the coins is as follows:

…the proof and uncirculated American Buffalo Coins feature designs based on the classic 1913, Type I Buffalo nickel, by James Earle Fraser.

Depicted on the obverse is the striking image of a Native American in profile.  An American Buffalo-also known as the bison-graces the coins’ reverse.

American Buffalo Gold coins go on sale July 22, at 12 noon (ET). The coins will be sold online at Mint page:

Does any one know the diameter and thickness mm’s (Milameter) of the new 2008 $5.00 Buffalo Coin – ( BY8 ) ?
I called the USMint and they do not have information listed with their operators…//// Why not ?