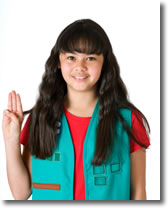 U.S. Representative Jack Kingston introduced coin legislation Thursday, June 26, seeking a silver dollar coin commemorating "the centennial of the establishment of the Girl Scouts of the United States of America."

The coin bill is officially named H.R. 6404. It’s so freshly new that the Government Printing Office (GPO) has not yet had the chance to enter the text of the legislation into their system.

It does, however, have an impressive cosponsor list of 41 other members in the House. That’s strong showing for the initial stage of this bill.

If H.R. 6404 gets half the support the Boy Scouts of America Centennial Commemorative Coin Act has seen, it would seem likely to eventually pass the House, Senate and get signed by the President to become law. (There’s no guarantees, but passage of the Boy Scouts commemorative silver dollar coin for 2010 looks to be assured.)

Girl Scouts of the USA was founded in 1912 by Juliette Gordon Low. According to their site, membership has grown from 18 members in Savannah, Georgia, to 3.7 million members throughout the United States, including U.S. territories, and in more than 90 countries through USA Girl Scouts Overseas.

With a founding date of 1912, the Girl Scouts commemorative coin would likely be targeted for issuance in 2012.

If so, unless a special provision was included, it would have to compete for passage with two other proposed commemorative silver dollars that have already seen Congressional action this year — the National Infantry Museum and Soldier Center Commemorative Coin Act and Star-Spangled Banner and War of 1812 Bicentennial Commemorative Coin Act.

Law limits the number of commemorative coins to two a year.