New Zealand has issued commemorative silver and gold proof coins honoring the life achievements of Sir Edmund Hillary. The release of the proof coins mark the 55th anniversary of Hillary’s adventurous climb of Mount Everest with Sherpa Tenzing Norgay on May 29, 1953. The two were the first climbers to conquer Everest. 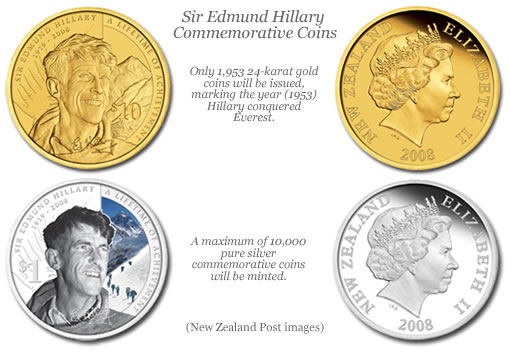 Sir Edmund Hillary was 33 then, and lived on to accomplish other extraordinary feats during his 88-year lifetime. According to the New Zealand Post, who released the coins,

While he shot to International fame following his Everest accomplishment, he is equally renowned for his subsequent achievements in mountaineering and Antarctic expeditions, his devotion to the Nepalese people through his founding of the Himalayan Trust and his support of the great outdoors.

A total of 10,000 silver coins are to be minted with a legal tendered value of $1 NZD. The 0.999% pure silver coin weighs an ounce and is priced at $89 NZD. (International Currency Converter.)

Each coin bears the inscription, ‘A Lifetime of Achievement’, and depicts Sir Edmund against a backdrop of the world’s highest peak, Mount Everest. Both coins have an obverse portrait of Her Majesty Queen Elizabeth II by Ian Rank-Broadley, of England.

A portion of the proceeds for each coin will go to the Himalayan Trust founded by Hillary. A message on the site reflects Hillary’s compassion for the Nepalese people,

“To many Western eyes, the Everest region is a place of great beauty and high mountains to be conquered. For the Sherpas who live there, however, life has few privileges. Medicine and Education are scarce, bridges and path are often destroyed, and the forest upon which they depend are rapidly depleting.

Despite these hardships, they are the most warm-hearted people I know. Any help you can provide will be so important and so gratefully received.”

Sir Edmund Hillary was a humble man and at one time compared himself to the New Zealand people,

"In some ways I believe I epitomize the average New Zealander: I have modest abilities, I combine these with a good deal of determination, and I rather like to succeed."

A TIME article by Simon Robinson entitled Sir Edmund Hillary: Top of the World, ends with:

Once, while resting on a rock during a short trek in Nepal with friend and film director Michael Dillon, an American walker stopped and showed Hillary how to hold an ice-axe. “Hillary listened and thanked him, but said nothing else,” remembers Dillon. “The American went away without any idea whom he had spoken to.” The first man to stand on top of the world didn’t see himself as a hero. Others always will.

A remarkable man he was.

Glen, the New Zealand Post has an online store that ships to the U.S. The information/order page is at: