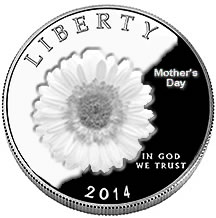 If two U.S. senators have their way, in a few years you may be giving your mother a silver coin for Mother’s Day rather than the traditional card, flowers or candy. They propose a commemorative silver dollar to celebrate the event.

Senator Jay Rockefeller [D-WV] and Senator Robert C. Byrd [WV], the longest serving senator in history at age 90, introduced a new bill on April 17, 2008 that seeks the creation of a commemorative silver dollar to celebrate the 100th anniversary of Mother’s Day.

Although it is normal to introduce coin legislation year’s prior to the coin’s intended release date given the limit by law of two commemorative coins per year, this proposed legislation is more aggressive than most with its early introduction.

The bill has currently been read twice in the Senate and it is now awaiting consideration by the Committee on Banking, Housing, and Urban Affairs.

The two senators proposing the commemorative coin are from West Virginia, as was Anna Jarvis who is considered the founder of Mother’s Day. Anna Jarvis was born in the small town of Webster in Taylor County in 1864 and later moved with her family to Grafton, West Virginia. Soon after the 1905 death of her mother, Ann Maria Reeves Jarvis, Anna campaigned for a national Mother’s Day holiday.

In an interesting turn, later in life Anna Jarvis became discouraged with the commercialism of Mother’s Day. It is said she regretted its creation due to that fact. She campaigned against Mother’s Day and went as far as filing suite regarding its celebration in New York.

While Anna Jarvis disliked the commercialism of Mother’s Day and some can argue the creation and buying of a commemorative Mother’s Day coin would add to her disdain, S. 2883 would at least turn some profits of coins sales toward positive causes.

Every Mother’s Day coin would have $10 surcharge added with eventual payments going to:

(1) 1/2 to the Susan G. Komen for the Cure for the purpose of furthering research funded by the organization.

Mr. ROCKEFELLER (for himself and Mr. BYRD) introduced the following bill; which was read twice and referred to the Committee on Banking, Housing, and Urban Affairs

To require the Secretary of the Treasury to mint coins in commemoration of the centennial of the establishment of Mother’s Day.

This Act may be cited as the `Mother’s Day Centennial Commemorative Coin Act’.

The Congress hereby finds as follows:

(1) Anna Jarvis, who is considered to be the founder of the modern Mother’s Day, was born in Webster, West Virginia on May 1, 1864.

(2) A resident of Grafton, West Virginia, Anna Jarvis dedicated much of her adult life to honoring her mother, Anna Reeves Jarvis, who passed on May 9, 1905.

(5) On May 8, 1914, the Sixty-Third Congress approved H.J. Res. 263 designating the second Sunday in May to be observed as Mother’s Day and encouraging all Americans to display the American flag at their homes as a public expression of the love and reverence for the mothers of our Nation.

(6) On May 9, 1914, President Woodrow Wilson issued a Presidential Proclamation directing government officials to display the American flag on all government buildings and inviting the American people to display the flag at their homes on the second Sunday of May as a public expression of the love and reverence for the mothers of our Nation.

(a) Denominations- The Secretary of the Treasury (hereinafter in this Act referred to as the `Secretary’) shall mint and issue not more than 400,000 $1 coins, each of which shall–

(c) Numismatic Items- For purposes of section 5136 of title 31, United States Code, all coins minted under this Act shall be considered to be numismatic items.

(a) Design Requirements- The design of the coins minted under this Act shall be emblematic of the 100th anniversary of President Wilson’s proclamation designating the second Sunday in May as Mother’s Day.

(b) Designation and Inscriptions- On each coin minted under this Act, there shall be–

(1) a designation of the value of the coin;

(3) inscriptions of the words `Liberty’, `In God We Trust’, `United States of America’, and `E Pluribus Unum’.

(1) selected by the Secretary after consultation with the Commission of Fine Arts; and

(b) Commencement of Issuance- The Secretary may issue coins minted under this Act beginning January 1, 2014, except that the Secretary may initiate sales of such coins, without issuance, before such date.

(c) Termination of Minting Authority- No coins shall be minted under this Act after December 31, 2014.

(a) Sale Price- Notwithstanding any other provision of law, the coins issued under this Act shall be sold by the Secretary at a price equal to the sum of the face value of the coins, the surcharge required under section 7(a) for the coins, and the cost of designing and issuing such coins (including labor, materials, dies, use of machinery, overhead expenses, and marketing).

(c) Prepaid Orders at a Discount-

(a) Surcharge Required- All sales shall include a surcharge of $10 per coin.

(b) Distribution- Subject to section 5134(f) of title 31, United States Code, all surcharges which are received by the Secretary from the sale of coins issued under this Act shall be promptly paid by the Secretary as follows:

(1) 1/2 to the Susan G. Komen for the Cure for the purpose of furthering research funded by the organization.

(c) Audits- The Susan G. Komen for the Cure and the National Osteoporosis Foundation shall be subject to the audit requirements of section 5134(f)(2) of title 31, United States Code, with regard to the amounts received by the respective organizations under subsection (b).