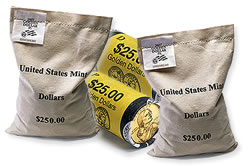 The United States Mint has officially announced the sale of 2008 Sacagawea Golden Dollar coins. Coin bags and coin rolls of Sacagawea’s will be made available at 12:00 noon (ET) on April 28, 2008.

Each roll of Sacagawea Golden Dollars contains 25 coins wrapped in distinctive packaging. The canvas bags contain 250 coins. Both options bear either the “P” or the “D” mint mark denoting their originating Mint facility in Philadelphia or Denver.

Mint previously announced the sale of 2008 Sacagawea coins, but pulls the plug

The Mint first announced the sale of 2008 Sacagawea dollars in a product update to the public back in mid January. However, they quickly pulled them. 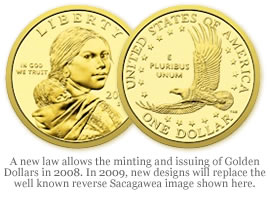 Realizing the Sacagawea reverse design would change in 2009 due to the Native American $1 Coin Act, which calls for new coin designs, there was extra interest in buying 2008-dated Sacagawea coins with the soon to be discontinued eagle design.

But collectors who tried to place orders through the Mint were told that the coins were “not available”.

Later, potential legal issues in minting 2008 Sacagawea Golden Dollar coins became known. Although questions could be asked as to why they were initially offered, it was understood why the Mint stopped their sale — the freshly signed Native American $1 Coin Act may have inadvertently made minting of 2008 Sacagawea coins essentially illegal.

When H.R. 5478 was passed and then signed into law by President Bush on February 29, 2008, it authorized the minting of 2008 Sacagawea dollar coins. The Mint was given the official green light once again.

The reverse of the Sacagawea $1 was designed by former United States Mint Sculptor-Engraver Thomas D. Rogers, Sr. It features a soaring bald eagle and 17 stars representing each of the states at the time of the Lewis and Clark expedition.

The following 2008 Sacagawea coin products will be available from the Mint on April 28:

This year, similar to last, new 2008 Sacagawea Dollars will not purposely get produced for placement into daily circulation. There are already hundreds of millions of Presidential $1 coins sitting in vaults, waiting to be used. The 2008 production of the Sacagawea coins are directed more toward collectors. And to keep the Sacagawea coin "fresh" in the mind; not completely overshadowed by the presidential coins.

I would like to know how much are the rolls of sacagawea gold dollars, please let me know as soon as you can ,please
thank you
stephen sterner