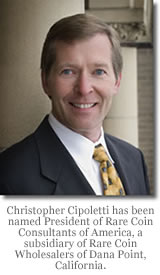 “Our company had more than $100 million in rare coin sales the past two years, and over 90 percent of those transactions were wholesale to other dealers.  Our new division will focus on new markets and customers who are private collectors or people looking for alternative investment opportunities,” said Steven L. Contursi, President of Rare Coin Wholesalers.

The new division will have a strong presence at financial services and investment trade shows.

“We’ll be working with financial planners and investment advisors as well as individuals.  There are many people who are interested in collecting, such as fine art, but are not yet comfortable with their knowledge of numismatics.  These are people who are looking for a strong investment vehicle that is fascinating to own while it produces returns,” said Cipoletti.

In addition to serving as ANA Executive Director for almost five years, Cipoletti is an accomplished attorney who received his Juris Doctor degree from Notre Dame Law School in 1986; created and presented leadership development and training seminars; is an active leader in many non-profit and civic organizations; and even owned and rejuvenated a Colorado inn and 150-seat restaurant.

In recent years, Contursi and Rare Coin Wholesalers have acquired and publicly exhibited such well known, historic items as the legendary King of Siam proof set that was presented as a diplomatic gift on behalf of President Andrew Jackson; America’s first gold coin, the unique 1787 Brasher Doubloon with punch mark on the eagle’s breast; and the Neil/Carter/Contursi 1794 Draped Bust dollar that many experts believe is the very first silver dollar ever struck by the United States Mint.

For additional information about Rare Coin Consultants of America, phone (800) 347-3250.