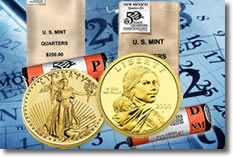 The United States Mint has updated their online product schedule to include coin and medal releases through May of 2008.

While the schedule is always subject to change and coin announcements will be released when new coins and medals become available, the release list at least provides a fairly accurate snapshot for what is likely to come and when.

Perhaps most notable on the updated list is the scheduled release of the 2008 Sacagawea Golden Dollar Bags and Rolls on April 28. The U.S. Mint had announced the upcoming sale of Sacagawea dollar coins earlier in the year, but quickly pulled its notice with concerns over the legal technicalities in minting them.

Those concerns were made mute when President Bush signed a new law enabling their legal mintage in 2008. In 2009, the Sacagawea coins will see new reverse or tails designs.

Here is the Mint’s latest schedule: