The Perth Mint of Australia is offering a unique set of silver proof World War II fighter plane coins for collectors. The Perth Mint is known for their production of themed legal tender coins, but this latest series of coins directly touches the history of five different countries and their mintage limit is capped to a very low quantity of 1,500 sets. 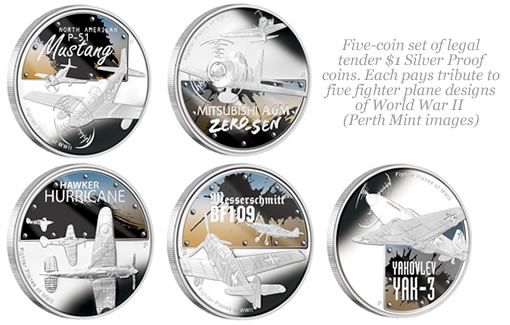 The World War II Fighter coins are striking in appearance with their proof quality and one ounce of 99.9% silver content. The colorized coins come within a 5-coin set. Each coins pays tribute to five World War II fighter plane designs.

Escorting US bombers deep inside Germany and making a similarly notable contribution in the Pacific theatre, the Mustang’s pivotal role during the latter half of the War persuaded many that it was one of the greatest US fighters ever built.

The RAF’s first monoplane fighter was also its first fighter capable of exceeding 300mph in level flight. Often perceived as a back up to the Supermarine Spitfire, the Hurricane was, in fact, Fighter Command’s most telling weapon during the Battle of Britain.

An impressively armed and highly manoeuvrable shipboard fighter, the Zero stunned the US with its appearance over Pearl Harbour in 1941.  In the latter stages of the War, the legendary fighter became the Japanese Navy’s prime kamikaze attack bomber.

Fast, manoeuvrable and versatile, the Bf109 destroyed more enemy aircraft during WWII than any other German fighter.  One of the secrets of its success was a fuel injection system that maintained a constant fuel supply during extreme manoeuvres.

The Yak-3 was the exceptional Soviet fighter of its era.  Particularly effective in dogfights at altitudes below 5,000 metres, the agile aircraft dominated the skies above the Eastern Front during the final phase of WWII.

The limited 1,500 five-coin set is currently priced at:

While the very low mintage is very attractive for collectors and especially so when taking into account the potential interest from collectors in at least five different countries, the coins are also sold at a high premium above their bullion value. It is an interesting mix in the buying decision.

The set of coins may be ordered online through the Perth Mint product page: