Dallas, TX. An 1838-O half dollar, one of less than a dozen known, is being offered at auction in Rosemont, Illinois on April 16-18. Classic numismatic rarities, these were struck to commemorate the opening of the U.S. Mint in New Orleans; opportunities to acquire an example are extremely limited, as perhaps just 20 proofs were coined at the time. 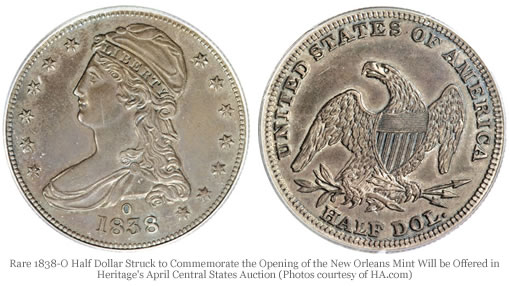 The coin is included in the catalog for the Official Auction of the Central States Numismatic Society convention, being held in Rosemont, Illinois on April 17-19; the catalog is now posted by Heritage Auction Galleries on their HA.com/Currency website.

“These 1838-dated coins,” according to Heritage President Greg Rohan, “were actually minted early in 1839 in New Orleans, from one of the two die pairs received from Philadelphia. At one time in the 19th century, it was thought that the 1838-O half dollars were die trials that were struck in Philadelphia, but this was refuted when documentation was found from New Orleans coiner Rufus Tyler, who stated that ‘not more than 20 pieces’ were struck.”

“Although struck as Proofs for presentation purposes, several of the few survivors,” concluded Rohan, “such as this one, circulated briefly before their rarity was recognized. This example has been certified by the Professional Coin Grading Service as a PR45. Today’s marketplace is recognizing the importance and rarity of this issue, and it is rising to the level of the 1870-S Seated dollars and the 1894-S Barber dimes. This example comes to the auction block out of the Yoder Family Collection.”

I have one 1838 half dollar and many other old coins. I live in South Florida and am wondering where i can go to get them appraised and possibly sell them.