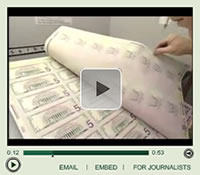 WASHINGTON, D.C. — The first new $5 bill was issued by the Federal Reserve today during a commemorative transaction at President Lincoln’s Cottage at the Soldiers’ Home in Washington, D.C., a historic site used by the former president as a White House summer retreat.

Officials from the Federal Reserve Board, U.S. Treasury, Bureau of Engraving and Printing and U.S. Secret Service ushered the new $5 bill into circulation at the Lincoln Cottage gift shop.

Michael Lambert, Assistant Director, Division of Reserve Bank Operations and Payment Systems at the Federal Reserve Board, spent the first new $5 bill on a book of President Lincoln’s speeches. President Lincoln’s portrait continues to be featured on this redesign of the $5 bill.

“The redesigned $5 bill’s enhanced security features help ensure we stay ahead of counterfeiters and protect your hard-earned money,” Lambert said. “It only takes a few seconds to check the new $5 bill to make sure it’s genuine. If you know how to check its security features, you can easily be confident it’s real.”

Today, Federal Reserve banks will begin distributing the redesigned $5 bills to customer banks, which will then distribute them to businesses and consumers. The new $5 bill designs will circulate first in the U.S. and gradually spread to other countries as international banks place orders for them from the Federal Reserve. You don’t have to trade in your old bills for new ones. Both the new $5 bills and the older-design $5 bills will continue to maintain their full face value.

The new $5 bill incorporates state-of-the-art security features that are easy to use by cash handlers and consumers alike. Hold the bill to the light to check for these features:

President Lincoln’s Cottage at the Soldiers’ Home in Washington, D.C. (www.lincolncottage.org), which has recently been restored and is now open to the public, was chosen as the location to spend the first new $5 bill because of its historic significance to President Lincoln, the subject of the bill’s portrait. President Lincoln established the United States Secret Service the same evening he was assassinated and made safeguarding the nation’s currency from counterfeiters the agency’s primary mission.

Every person or business that gets a counterfeit bill experiences a real economic loss, and in 2007, $61.4 million in counterfeit money was passed in the United States.

“Everyone who uses U.S. currency is on the front line of defense against counterfeiters,” said Michael Merritt, Deputy Assistant Director, U.S. Secret Service. “The best way to protect yourself is to learn the security features. It’s simple, it’s quick, and it can save you from accepting a fake.”

Treasurer of the United States Anna Escobedo Cabral encouraged businesses and individuals to visit www.moneyfactory.gov/newmoney to order or download educational materials about the new $5 bill and other recently redesigned currency, including the $10, $20 and $50 bills. “Each time we introduce a new bill, we provide the information businesses and individuals need to empower themselves – to learn how to use the security features and verify that a bill is genuine.”

Free educational materials are available to businesses, financial institutions, trade and professional associations, citizen groups and individuals to prepare cash handlers and consumers to recognize the new design and protect themselves against counterfeits. Since 2003, the U.S. government has distributed about 80 million pieces of public education and training materials about the new $5, $10, $20 and $50 bill redesigns. Materials are available to order or download in multiple languages at www.moneyfactory.gov/newmoney.

Manufacturers and users of cash-handling equipment are also an important audience for education about new currency designs. “Because the $5 bill is used so heavily in vending, self-service and transit farecard machines, we began working with the manufacturers of those and other cash-oriented machines in 2006 to make sure they had enough time to make the necessary adjustments that would allow for their machines to accept the new $5 bill,” said Pamela Gardiner, Deputy Director of the Treasury’s Bureau of Engraving and Printing.

As with the redesigned $10, $20 and $50 bills that preceded it, the new $5 bill features an American symbol of freedom printed in the background. The Great Seal of the United States, featuring an eagle and shield, is printed in purple on the front of the bill. Additional design elements include:

The new $5 bill’s most noticeable design difference is the addition of light purple in the center of the bill, which blends into gray near the edges. Because color can be duplicated, consumers and cash-handlers should use the key security features – on the new $5 bill, the watermarks and security thread – not color, to check the authenticity of paper money.

The Bureau of Engraving and Printing (BEP) is the largest producer of security documents in the United States. The BEP prints billions of Federal Reserve Notes for delivery to the Federal Reserve System each year (the BEP does not produce coins – all coinage is minted by the United States Mint). These notes are produced at facilities in Washington, DC, and Fort Worth, Texas. In addition to U.S. currency, the BEP produces several other security documents such as portions of U.S. passports, materials for Homeland Security, military identification cards, and Immigration and Naturalization Certificates.

5 Euro Notes are better than 5 Dollar Bills because it worth more everyday. It is no use to fight counterfeiter because value of U.S. Dollar is falling everyday. It is another waste of government money so forget about it! Just prepare for Amero or new currency after the Greenback’s demise!

i would like information on any u.s. bill that reveals usually microscopic details. like names of states on a twenty, cars on a ten, owl on a one, a key on a one etc.thank you for a response.

Sorry I missed this one. (A) There are no states on the $20; they’re on the top of the Lincoln Memorial on the FIVE. Just look at the bills. (And yes, I’ve actually been asked why you can’t see the names of all the states! My response is that printed pictures only move in Harry Potter movies.) (B) The car on the old $10 bill is a generic car. The BEP took pains not to depict any specific make. (C) The supposed owl, spider, key, and who knows what else (monkey wrench? pumpkin?) on $1 bills are artifacts of the… Read more »