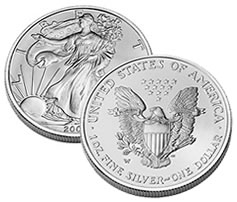 The United States Mint has announced a release date of March 17 and a price of $25.95 for the new Uncirculated American Eagle Silver collector coin. Each coin contains one troy ounce of .999 silver and bears the distinctive "W" mint mark to indicate it was produced at the Mint’s West Point facility.

The U.S. Mint has produced American Eagle Silver coins since 1986. While uncirculated silver eagles have been available every year since, they were not offered with the "W" mint mark and "burnished" finish. The Mint first started producing these collector coins two years ago.

The coin’s obverse or heads design features "an ever hopeful Liberty striding confidently toward the sunrise, draped in the strength of the Stars and Stripes carrying in her arms branches of laurel and oak to symbolize both civil and military glory."

The reverse or tails design is by Mint sculptor John Mercanti and features a shielded heraldic eagle holding an olive branch in one talon and arrows in the other.

The 2008 price reflects a $4 dollar increase over 2007 minted coins. However, comparing apples to apples – this year to last year prices and taking the cost of an ounce of silver into account – $25.95 is the better priced bargain.

An ounce of London silver averaged $13.38 in 2007. At the time of this writing, silver is $20.25 an ounce. As long as silver stays above $17.39, the 2008 silver eagle uncirculated coins are the better competitive value (at least from a historical perspective).

Mint News Blog has a similar perspective of the pricing using silver prices at the release time of the 2007 coins. The article may be found at 2008-W Burnished Silver Eagle Release Date and Pricing Announced.

The eagle coins will be available March 17 at noon (ET). At that time, they will be listed on the U.S. Mint’s online page:

The proof version of the American Eagle silver coin went on sale Jan. 3. for $31.95.

More information about the silver eagles coins may be found at, The American Eagle Silver Coin: History, Design, Prices and Mint Figures.

How many 2008 Silver Eagle Rev of ’07 were minted at the WestPoint mint?