The British Royal Mint is celebrating the 25th anniversary of the decimal £1 coin with two special and spectacular 14-coin proof collector sets. The rare commemorative 22-carat gold proof set and the .925 sterling silver proof collection each bear reverse designs that have been used on pound coins during the last twenty-five years. 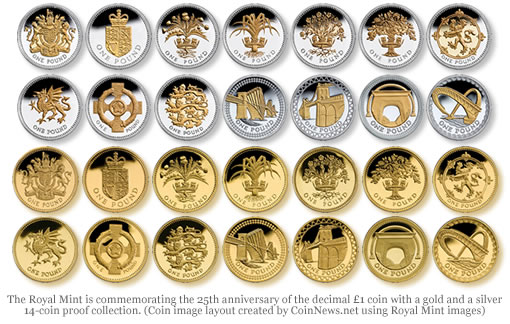 Both sets of coins look exceptional. One thing, however … Do not get too excited about the gold proof set. The coins are already extremely rare. With the Mint only producing 150 sets worldwide, few will ever see them in person.

For an added contrast to the silver proof coins, the Royal Mint added 24-karat gold plating to each coin’s designs, making them "pop" with extra detail.

The reverse design of the pound coin changes every year through a five year cycle of designs representing England, Wales, Scotland and Northern Ireland.

The following chart reflects the coin design used during a specific year(s) and includes images of the new 25th anniversary silver and gold proof coins bearing each design. It also lists the associated artist or designer and a description of each design. (Images and descriptions courtesy of Royal Mint.)

While you can gather this information from above, here is a simpler listing by artist, and the years their coin designs were used:

The 14 coins in the collections bear the same obverse design, Her Majesty The Queen by Ian Rank-Broadley FRBS. 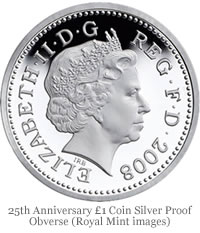 There is an interesting history of the pound coin, as provided by the Royal Mint website:

On 28 October 1489 Henry VII instructed the officers of the Mint in the Tower to strike a new gold coin.

The pound sterling had been a unit of account for centuries but this new gold coin, given a face value of 20 shillings, was effectively the first pound coin. It was spectacular – the largest gold coin yet issued in England and arguably the most beautiful. Bearing elaborate yet commanding designs and named a sovereign, it was deliberately intended as a statement of the power and dignity of the new Tudor dynasty and was duly struck in turn by each of the Tudor monarchs.

When James I came to the throne, however, the coinage was to reflect his pride in uniting the crowns of Scotland and England and the sovereign was renamed the unite. In the eighteenth century the key gold coin was the famous guinea, a coin whose value rose and fell with the price of gold until finally stabilising at 21 shillings. Gold coins largely gave way to notes during the Napoleonic Wars but following the great reform of the coinage in 1816–17 after Waterloo gold was adopted as the ‘sole Standard Measure of Value’.

It was originally intended in 1817 to re–introduce the guinea but it was found that ‘a very general wish prevails among the Public in favour of a Coinage of Gold Pieces of the value of Twenty Shillings and Ten Shillings, in preference to Guineas, Half Guineas and Seven-Shilling Pieces’.

Hence a new gold coin was born and given the old name of sovereign. Smaller and thicker than its Tudor predecessor, but still 20 shillings in value, the revived sovereign came to be regarded as the ‘chief coin of the world’ and remained in everyday use until the First World War.

Once again £1 coins were replaced by banknotes, but by 1980 it had become apparent that, due to the increases in prices and the relatively short life–span of a £1 note in circulation, the £1 unit of currency was more appropriate as a coin.

The new £1 coin made its appearance in 1983 and, on its reverse, bore an intricate depiction of the Royal Arms. Since that time there have been a total of 13 different reverse designs on the £1 coin representing the constituent parts of the United Kingdom.

Coin specifications for each collection

The coin specifications are exact within each set. For the gold proof set:

For the silver proof set:

The collections may be ordered online through the Royal Mint product and order pages:

The Royal Mint includes an optional payment and delivery plan for the silver anniversary proof set. For an introductory price of £49.90, the Mint will send the first two coins in the collection. Approximately every month another two coins will be sent for the price £59.90. Running the numbers, the total price comes to ~ £409.

Additional information may be found on the Royal Mint page:

The Royal Mint is a department of government and its primary responsibility remains the provision of the United Kingdom coinage.  Its reputation, however, extends beyond this and internationally it has a reputation for making some fascinating coins for over 100 countries.

The history of the Royal Mint itself stretches back over 1100 years.  There is an unbroken link from the scattered workshops of the moneyers of Anglo-Saxon London to a single mint within the Tower of London, from a purpose-built premises at Tower Hill to the huge modern coining plant in South Wales.

I have one gold coin. It is called 1992 leslie dorbin oak tree and royal diadem representing england …one pound.

My guestion, how much does it equal in US money? thank you

Recently in my change i happened to come across a 1996 Celtic cross pound coin, this coin caught my eye in particular because it was so shiny and it was from 1996. I did some research on the internet and i came across the 25th anniversary set which happens to be quite rare, i am wondering if this coin may be part of an incomplete set so i have linked some photos to see if its worth getting further investigated , I am also from Eastbourne. thanks

I’ve found two celtic cross, a lion rampant and a royal arms (all in gold).
How much are they worth?