The 2008 First Spouse gold coins and bronze medal honoring Elizabeth Monroe are now on sale by the United States Mint. The Monroe gold coins are the first for 2008 and fifth in the First Spouse Gold Coin Series – a series that started off blazing hot. 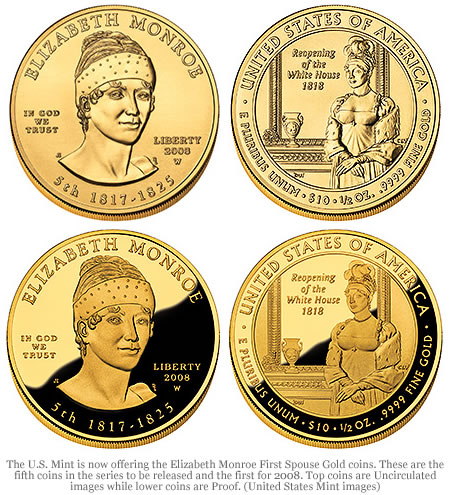 The first three spousal coins were on fire and sold out within hours of their release. Secondary markets through eBay and the likes could not hold enough of the coins and their resell values were through the roof.

The market for spousal coins started teetering before the Dolley Madison gold coins were released. The Elizabeth Monroe coins are attractive collector coins and it will be interesting to see how, if at all, the market for the series will change with their release. As of late, volatile gold prices throws in an extra air of unpredictability.

An interesting account of the life of Elizabeth Monroe may be found on, National First ladies’ Library.

The design, as taken from the Mint release announcing the coins:

The obverse of the Elizabeth Monroe First Spouse Gold Coin bears a portrait designed by Artistic Infusion Program Master Designer Joel Iskowitz and executed by United States Mint Sculptor-Engraver Don Everhart. Inscriptions on the coin are “Elizabeth Monroe” and “1817-1825,” the years she served as First Spouse. Additional inscriptions on the obverse of the coin are “In God We Trust,” “Liberty” and “2008.”

The coin’s reverse features a portrait of Elizabeth Monroe at a reception marking the 1818 reopening of the White House after it had been burned during the War of 1812. Inscriptions are “United States of America,” “E Pluribus Unum,” “$10,” “1/2 oz.” and “.9999 Fine Gold.” The reverse of the Elizabeth Monroe First Spouse Gold Coin was designed by Artistic Infusion Program Associate Designer Donna Weaver and sculpted by United States Mint Sculptor-Engraver Charles Vickers.

Proof and uncirculated Elizabeth Monroe First Spouse Gold Coins are available. The proof coin is priced at $619.95 while the uncirculated is $599.95. Both are 24-karat gold and have a total mintage limit set at 40,000 across both products.

A bronze medal version is also available for $3.50.

Each is type marked $90 less than the Elizabeth Monroe gold coins.

The medal may be purchased from:

Although not yet announced, if the Mint follows tradition from 2007, a four medal set containing all four First Spouse medals for 2008 will be made available later in the year. An uncirculated Monroe Presidential $1 coin packaged with an Elizabeth Monroe medal will likely be for sale as well.