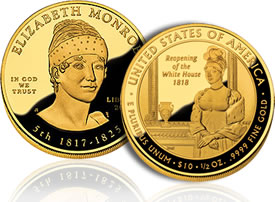 After two weeks of unbending sales figures, 2008 Elizabeth Monroe First Spouse Gold Coins appear to have closed down to a final tally of 12,452 sold. The coins recently went off sale (March 5) when the US Mint launched their 2009 First Spouse Anna Harrison Coins.

For the numbers, 4,519 uncirculated and 7,933 proof $10 gold Monroes were sold out of the 40,000 maximum mintage. They were released fifth in the First Spouse series and have proven to be the least collected so far. And unfortunately for the Mint, a continuation of a declining sales trend that began with the 2007 Dolley Madisons — the first in the series not sell out.

Remember the surprise in discovering how the 2007 Martha, Adams and Jefferson gold coins sold like hot cakes? Then again, their prices were substantially lower. Collectors now have to pay about $200 more for the same type coins minted today. That is an enormous obstacle on top of calculating the total price to collect every version through to 2016.

The Mint spouse program looks like it is becoming less popular. Unusual? Hardly. History shows demand for modern coin programs slow as they age. Less known First Ladies and their spouse Presidents should also be weighed into the demand mix. Upcoming Lincoln, Roosevelt and Kennedy First Spouse Coins — to name three as examples — are likely to be extremely popular with collectors

In the brightest of spots, collectors today are purchasing more scarce coins. And interestingly, current eBay auctions for the Monroes have price listings higher than Mint prices of just three weeks ago.