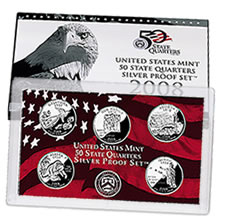 2008 State Quarter Silver Proof Sets are now on sale by the United States Mint with each priced at $25.95. The non silver version of the state quarter proof sets went on sale back in January and are available for $13.95.

The main difference between the two is the 90% silver contained within each quarter of the silver sets. Both sets contain five proof quarters with their honoring commemorative designs:

The United States Mint announcement of the silver proof set reflected that these states represent the last to be honored in the 50 State Quarters® Program – a ten year program that started back in 1999 with the release of a new state quarter design every 10 weeks.

Although they are the final state designed quarters, 2009 will see six new quarter-dollar coins in the District of Columbia and United States Territories Circulating Quarter Dollar Program.

How proof sets are different from circulating coins

The coins in each set are proof. The Mint describes the term proof as,

The 2008 State Quarter Silver Proof Sets also bear the “S” mint mark, denoting they were produced at the San Francisco Mint facility. Every day circulation quarters are produced in either the Denver or Philadelphia Mint facility.

The price for each set is $25.95, plus $4.95 for shipping and handling. The coin sets are available for purchase online through the Mint’s page: