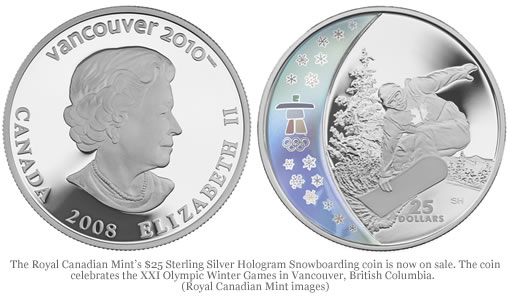 The $25 sterling silver coin is part of the Silver Hologram Coin Series, which includes 15 different designs or themes. The snowboarding theme is the first for 2008 and the sixth in the hologram series that will continue through the end of 2009. Only 45,000 coins will be minted for each theme.

The special 2008 Snowboarding $25 Sterling Silver Hologram Coin can be purchased through the the Royal Canadian Mint website for $71.95 (CAN).

Given that the series began in 2007 and the Mint recognizes collectors may have missed purchasing past coins, a special "catch-up" program is available.

For the price of $419.70, all previously released Silver Hologram Series Coins may be purchased. There is also an equal monthly $69.95 payment option available.

The past and future themes designed around snow or ice and celebrate the spirit of athletes are:

The currently released coins are also available for international customers through the Mint website or phone.