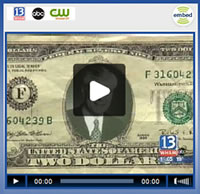 New Presidential $1 Coins are certainly a hit with many collectors, but their acceptance elsewhere since they were first introduced in 2007 has been slow.

Like the Susan B. Anthony and Sacagawea golden dollars, Presidential $1 coins face a daunting and nearly impossible task of competing with the one dollar bill.

Regardless of the historical and interesting aspects of any dollar coin, handling and using paper bills in every day life is simply too convenient. When it comes to the dollar, most people want to use and receive paper in transactions, not coin.

Most seriously minded people analyzing the mandated job of the United States Mint in promoting daily usage of dollar coins recognize they have an uphill battle and can only expect small gains here and there. Unless or until the dollar bill is removed from circulation, it will always remain king. Regardless of the fact that the dollar coin is a money saver for the government.

While nearly one billion circulating presidential coins were been produced in 2007 by the U.S. Mint (940,870,000 as reported), many Americans have actually never received a single coin in a daily transaction.

For that matter, in some areas of the country it can be a challenge to find presidential $1 coins within financial institutions. Banks have to pay extra when they order presidential dollars and storing them within their vaults when public demand for them is low is not an attractive proposition.

According to the U.S. Census Bureau population clock, the current population is approximately 303,475,000. There should be enough Presidential $1 Coins minted in 2007 to provide every man, women and child at least three of them.

Many of the 2007 coins are likely still bagged, gathering dust in Federal Reserve vaults. Those vault stockpiles could increase. More of the coins are on the way, like the newly released James Monroe $1 coins.

Yet, the Mint must go on and, by law, produce more coins and promote their usage – not just to collectors, but more importantly, to the entire public.

Although it would be hard to argue that the Mint has had success on any grand scale to date, they have made strides. The embedded 2 min and 34 sec video report from Rochester, NY and ABC’s 13 Wham News recounts one of them.

The video discusses how Wal-Mart stores are handing out Presidential $1 Coins. One of the interesting facts the video highlights is the cost of the dollar coin vs. the dollar bill.

Inflation will make $5 Dollar Coin will be soon be in making. Soon penny and nickel could be removed from circulation. Or be made of plastic!

I find this interesting. I know that the US Mint was suppose to start a campaign for these, not as strong as the Sacagawea’s though, but they never said what they’d do. I wouldn’t be surprised if this was another promotion as one employee said in an article (from a different site) that the government told them to do this. The US government can’t force anyone to give these out, but they could make some kind of deal with Wal-Mart again. Even so, the arguments they give are true and the coin does last longer and in the long run… Read more »

Question: I heard on the news that the Dollar Coin – with Washington or Adams that does not have “In God We Trust” on the side is a collectors item. Does anyone know the value of such?

$1 coins that did not have the edge writing on them were originally selling at $200 on Ebay, but now I think they are closer to $50. I don’t know long this will last. With usage it appears that the coins edge does wear down somewhat lessening the appearance of the edge writing. Over time I wouldn’t be surprised if more coins showed up with no edge writing due to normal wear and tear.

For now though they are worth more than a coin with edge writing.

“Unless or until the dollar bill is removed from circulation, it will always remain king.” Earth to BEP and U.S. Mint … Co-circulation has never worked in any major country. I don’t understand why everyone in our government thinks the U.S. is somehow different. “People will complain for awhile but,they will get used to it in time.” Absolutely! There was a lot of squawking in Canada when the Loonie first appeared. But I was in Toronto a few years later when the $2 coin was being designed and the news was filled with positive comments. People now liked their $1… Read more »

Why not let the public purchase all those presidential dollar coins presently in storage vaults at face value (like they used to) and see what happens?