Coin Articles, Books, Magazines, and Videos The Making of US Coins: The History Channel Answers the Questions 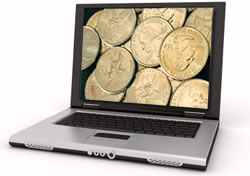 The emergence of Internet on-demand videos has not only provided the excitement of action-packed movies that can be viewed straight from your computer, but the availability of interesting, educational and free video content.

While coinage related video content is somewhat scarce in the numismatic world, there are indeed a few gems out there. The History Channel website through History.com has an example of one such gem.

The History Channel is known as a leading provider of exceptional content that won’t put you to sleep. For anyone – not just new or experienced coin collectors – their video production on how coins are made will intrigue you while keeping your interest.

While the video, Modern Marvels: Coin Production, is short at only 8 minutes and 25 seconds, it’s entertaining and extremely informational. If you’ve ever had questions about how coins are manufactured, this video will answer them while providing fascinating insights.

The video eliminates the confusion in how coins are produced by providing real-world video and short interview clips. For areas that can’t be clearly shown or described by video examples, excellent animation is used.