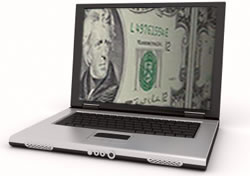 We’ve said it before … "The emergence of Internet on-demand videos has not only provided the excitement of action-packed movies that can be viewed straight from your computer, but the availability of interesting, educational and free video content."

There’s naturally a security component of having to hide facets of producing money and perhaps that’s one reason so few videos are available. Fortunately, there are at least two videos worth recommending that cover the creation and design of currency.

The History Channel website through History.com offers intriguing Internet-enabled videos that are free to watch. Their Modern Marvels: Currency video runs at 8 minutes and 20 seconds. Like a good movie, you won’t notice the time flying by while watching. It’s surprisingly succinct, yet engagingly descriptive and educational.

The Bureau of Engraving and Printing (BEP) video: The redesign and security features of the $5 bill

On Sept. 20, 2007, the Bureau of Engraving and Printing (BEP) digitally unveiled the redesign of the new U.S. $5 bill for circulation in 2008. They described the bill as: "Safer, Smarter. More Secure."

Along with their digital release of the new $5 bill, the BEP produced a video describing the new design and those security features so highly touted. Again, no secrets in currency production are provided but it does detail security features of the bill itself, which offers insights you’ll likely find interesting.

This video won’t make you sleepy. It’s short and put together well. It includes several comments from BEP and Treasury officials discussing and showing:

If you prefer reading and looking at the images of the new bill design and security features, you can visit the Bureau of Engraving and Printing page, ‘The Redesigned Currency, About the new $5 Bill‘.