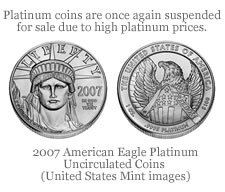 Platinum hit a record of $2,030.60 an ounce today on the New York Mercantile Exchange after just passing $2,000 yesterday. The further upward swing occurred after Impala Platinum Holdings Ltd., the second-biggest producer of the metal, reported a drop in output because of power cuts in South Africa.

Impala said it may lose 40,000 ounces of production equaling about two days of global supply. On top of the news, South African Eskom Holdings Ltd. indicated they would supply industry users with only 90 percent of their normal requirements through 2012.

In keeping with times past, like it or not, fast climbs in bullion have resulted in equally fast suspension of bullion coin sales by the U.S. Mint.

The Mint had just resumed platinum coin sales last week and now, for the third time in recent months, they once again suspended them. Within each of their newly suspended platinum product pages, the Mint has the following statement in bolded, red:

Due to the increasing market value of platinum, the American Eagle [name of product] are temporarily unavailable while pricing for this option can be adjusted; therefore, no orders can be taken at this time.

The broken record is playing all over again. It seems the U.S. Mint chooses to nudge by the scratch in what appears to consumers as government-style slowness instead of coming up with a better solution or adjusting prices quickly.

Of all the Proof and Uncirculated platinum coins, only the highly marked up 2007 American Eagle Platinum Proof One-Quarter Ounce Coin for $269.95 is still available. Based on the Mint’s history, there is absolutly no telling when the coins will be available to buy once again.

Since Platinum is a very rare metal, at least 20 times more rare than gold! It can increase price much farther than that! I think that everyone want to have Platinum Coins or Medals now!

Where did you hear that platinum is 20 times rarer than gold? Its rarity is far greater than that. I dont know the exact figure but it has to be literally over 100 times more rare and it wouldnt surprise me if it was far above that. It certainly isnt anywhere close to 20.