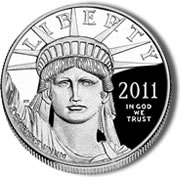 The Mint on Wednesday before noon Eastern Time is expected to raise the prices for its 2011 Proof Gold Eagle Coins, 2011 Uncirculated Gold Eagle Coin, First Spouse Gold Coins and Proof American Gold Buffalo. The opening price for the 2011 Proof Platinum Eagle Coin which launches on Thursday is also now known.

The United States Mint bases its collector gold and platinum coin prices on the average cost of precious metals between the previous Thursday and current Wednesday. The Mint cut coin prices last Wednesday as the London Fix weekly gold average dropped between $1,450.00 and $1,499.99 an ounce. However, the yellow metal has returned to a weekly average of above $1,500.00 an ounce, which calls for the following new coin prices:

In setting new coin prices, the United States Mint will generally freeze orders for the affected coins until their prices are adjusted upward. The entire process typically takes a few minutes and occurs between late morning and noon ET.

Visit http://catalog.usmint.gov/ for more information about any of the above coins.