Ottawa, Ontario – The Royal Canadian Mint (RCM) added to its star-studded line up of award-winning coins when Krause Publications bestowed the Coin of the Year and Most Innovative Coin Awards on the RCM’s laser-etched $50 Palladium Big Bear and Little Bear Constellations coin series at the 2008 Coin of the Year Awards. 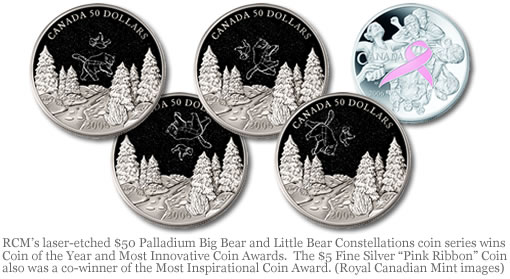 Adding even more to the RCM’s prestige, its 2006 colourized $5 Fine Silver “Pink Ribbon” Coin also was a co-winner of the Most Inspirational Coin Award. Krause Publications, of the United States, publishes World Coin News and Numismatic News, in addition to many respected numismatic catalogues and research titles.

“We welcome these distinctions during our centennial year, as the proud employees of the Royal Canadian Mint celebrate a century of achievement," said Ian E. Bennett, RCM President and CEO. “Our passion for innovation and excellence has made us a leader in the minting industry and we are delighted that these qualities are being recognized by leaders in the numismatic community.”

The $50 Palladium Big Bear and Little Bear Constellations coin series consists of four 31.16 g, 99.95% palladium coins featuring the constellations in a night sky, reproduced by a deep black laser-etching. Each coin displays the constellations as they would appear above Canada’s capital during each of the four seasons. This appealing and ingenious design is the work of RCM Product Manager Jennifer Holmes, whose impressive portfolio includes sell-outs such as the Gold $3 Square Beaver Coin and the square-holed $8 Fine Silver Chinese Coin. 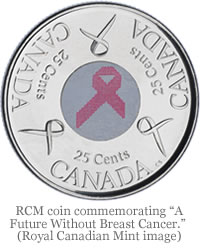 The 2006 $5 Fine Silver Pink Ribbon Coin was created in conjunction with the launch of the RCM’s second colour circulation coin, the 25-cent pink ribbon coin commemorating “A Future Without Breast Cancer”. In May 2007, this 25-cent circulation coin itself earned the Best Coin of the Year Award, among the inaugural Awards for Excellence in Currency from the International Association of Currency Affairs.

The annual Coin of the Year competition receives nominations from an international consortium of mint representatives and numismatists. The judging was conducted by an international panel of 55 of the world’s leading Mint officials, medalists, journalists, central bank and museum officials from 19 countries. RCM Engraver Susan Taylor participated in this panel. The winners of this year’s Coin of the Year competition were formally proclaimed today at the 2008 World Money Fair in Berlin, Germany.