Coin & Numismatic News Bowers and Merena Returns with Incredible Rarities as the Official Auctioneer of...

IRVINE, Calif. – Bowers and Merena Auctions, America’s leading rare coin auction house, continues as Official Auctioneer of the Baltimore Coin and Currency Convention in 2008, with the next auction scheduled for February 27 to March 2, 2008, at the Baltimore Convention Center. This is the first of three Baltimore auctions by Bowers and Merena in 2008, continuing their longstanding and ongoing association with the convention. 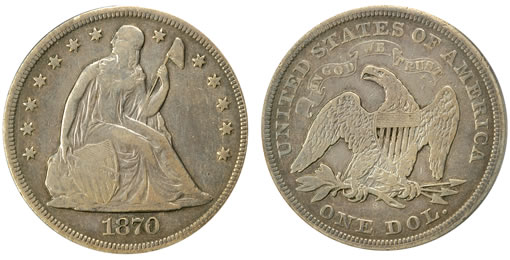 There is a long list of highlights offered in the 3,220-lot auction, most notably a very rare 1870-S Seated Liberty Silver Dollar, certified VF 25 by PCGS and considered to be one of the greatest American coin rarities. This particular coin, known as The Farouk-Schultz Specimen, enjoys a prestigious pedigree and auction history including the 1935 Norman Schultz Auction and Sotheby’s 1954 sale of the King Farouk collection, “The Palace Collections of Egypt” auction.

“It is truly an honor to be able to offer this extraordinary coin at auction and to add Bowers and Merena to its impressive history,” said Steve Deeds, president of Bowers and Merena. “For the 1870-S Seated Liberty Silver Dollar, only nine specimens have been auctioned to date and just three more are rumored to exist. Without question this is one of the rarest United States coins ever struck for circulation. It is the ultimate collector’s coin.”

Bowers and Merena is also pleased to host a special session of World coins, highlighted by the “Carl F. Chirico Jr. Collection of World Pattern Coins.” The Chirico Collection will be offered in 741 lots and features more than 2,500 worldwide Proofs, Patterns, Essais, Provas, Pieforts, and Trial Strikes from China, Belgium, Cambodia, France, Germany, Italy, Latin America, and Europe. The entire World session, including the Chirico coins, will be 886 lots.

“It is always an exciting event to bring together numismatic specimens from all over the world, and the Chirico Collection is an outstanding centerpiece for our World session,” Deeds said. “It represents the lifelong collection of a very passionate enthusiast. Mr. Chirico’s full collection spans the globe, but his favorite collection was Chinese pattern coins, which are very well represented in our auction.”

Also notable in the U.S. portion is “The Dan McClure Collection” Registry Set of Gold Commemoratives consisting of the 11-piece set of circulation strikes (1903-1926). The McClure Set (listed as “Deep 2” with PCGS) is ranked second among both the Current and All Time Finest Collections ever assembled and is listed on the PCGS.com website. It has a weighted GPA and ranking of 66.24 and will be auctioned as individual lots.

Additional coin highlights from the full auction include:

Bidding will open in early February. Pre-auction bids are welcome at www.bowersandmerena.com; by e-mail at auction@bowersandmerena.com; by phone at 800.458.4646; by fax at 949.253.4091; and by postal mail addressed to Bowers and Merena, Baltimore Auction February/March 2008, 18061 Fitch, Irvine, CA, 92614. Interested bidders are also encouraged to bid in-person at the live auction February 27 to March 2, 2008, or live online through the Bowers and Merena website. A complete auction and lot viewing schedule is available at www.bowersandmerena.com or by calling 800.458.4646.

For more information about Bowers and Merena and the Official Auction of the Baltimore Coin and Currency Convention in February/March, call 800.458.4646. For media inquiries, ask for President Steve Deeds. Complete prices realized for all past auctions are available at www.bowersandmerena.com.